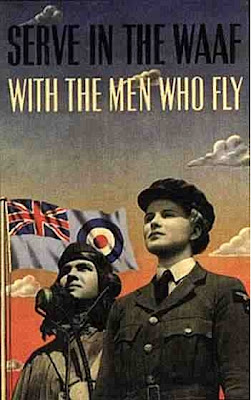 In 1944, the Allies had gained a foothold on French soil. I, a Corporal Radio Operator, was 'seeing' it from the face of a cathode ray tube in an American mobile unit 'somewhere on the south coast'. RAF Controllers and operators were being given intensive instruction whilst awaiting the delivery of similar gear and of a 'pride' of WAAF to man it. Both items arrived with commendable promptitude, and our tutors and their mobile left for conquests new - some of them disappointed at not being able to carry off some of our glamorous intake as 'souvenirs' - but we could not spare them.

On the day the ladies arrived, our Commanding Officer introduced them to our Operations Area. My crew were on duty, so I was able to carry out a sort of 'preview', and immediately espied a young, curly-haired LACW who looked as if she would make a suitable (and comely) addition to my crew - but I digress.

Four days later we were joined by another lady operator, rank of corporal, name of Pat (I think). In reply to my solicitous enquiry as to her deferred arrival, she explained that she had been on a course in a remote area of west Wales. She expressed the view that it must have been located there as the Good Lord could find no other use for the land. She went on to describe it as, "A boring dump with only one bright feature, a small local hotel run by a little fat man and his wife who, on spotting our occupational insignia, exclaimed 'Our son is wearing one of those', and thereafter treated us like an extension of their family."

"At the end of the course," Pat continued, "we went to the hotel to say goodbye, whereupon the L.F.M. and his W. let us into their private sitting room which boasted a piano and a radiogram with records, one of which I broke and 'stored' inside the radiogram. I forgot to apologise — a pity, as they had been so good to us."

What could I say but, "Well, you can do so now: the 'small hotel' is my home; the 'little fat man and his wife' are my parents. I’m glad they made you welcome, and I will not charge you for the record."

As for the young curly-haired LACW. Her maiden name was 'Curwen-Reed', a descendant of one Reverend John Curwen who, in the year 1840, had instigated the form of musical notation known as Tonic Solfa which I had learned at school and still use today. So I was aware of her family name years before she was aware of mine: what about that for the 'long arm of coincidence?’

Mary (Curly) and I were married at Reading in September 1946. How’s that for a happy ending?