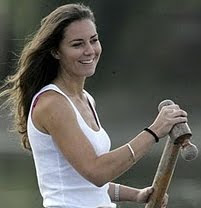 Well it looks like Prince William and Kate Middleton do have similar adventure traits - they both went to Patagonia in Chile on the same 10 week 'expedition' before they ever met - and within a few months of each other.

They even had the same expedition leader. He is Michael Sutherland and said that it was an 'absolutely crazy' coincidence that this should happen.

Mr.Sutherland explained to the London Evening Standard about the two expeditions:

"With the expedition that William was on, there was a clear understanding of who he was, while Kate was like you and I. She was like everyone else; she didn't have a profile.

She was by herself, like most people. She was definitely one of the fitter and stronger members of her group, which assisted her for sure. At times it was physically demanding. She was pretty easy going.

There are no hair dryers, and there are very few showers to be seen."

Gosh, just think: no hairdryers, wow, to go on a Chilean expedition and they don't provide them. And Kate is just like you or I - amazing!

Prince William made his trip in October 2000 and Kate did hers in January of 2001.

Mr. Sutherland also said about the couple, "I think a lot of people don't realise there is that common connection there in their pasts."

Raleigh International, who operated the treks said that Kate and William would have had to each raise £2,995 to fund their place.