On The Road Again Coincidences 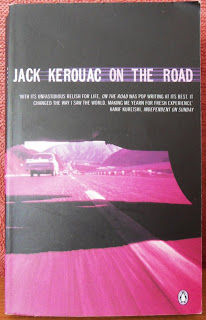 Since returning from holiday I've been saying that I have itchy feet and would like to be on the road again.

I went to a car boot sale and while there spotted a paperback of a book I read as a young man: the classic On the Road

by Jack Kerouac. I dug in my pocket for 25p (about 35c) and bought the book. I thought it would be good to read it again from a somewhat older perspective.

On The Road had impressed me years ago. The book synopsis describes the story:

"Sal Paradise, young and innocent, joins the slightly crazed Dean Moriarty on a breathless, exuberent ride back and forth across the United States. Their hedonistic search for release or fulfilment through drink, sex, drugs and jazz becomes an exploration of personal freedom."

Just the read for a young mind! Thought no more about it and then today read that they have now made a movie of the book, and this should be released towards the end of this year.

So a bit of a coincidence I thought: seeing the book and then reading that it had been made into a film.

My wife came in, having popped out to the local shop for a couple of things. She had with her a bottle of red wine, which she had free with some sort of voucher coupon. I looked at the bottle and there on the back was the name Jack Kerouac again! The reverse label stated:

"American novelist and poet Jack Kerouac, whose first major novel On The Road was autobiographical and based on his travels around America, was once a brakeman on the Coast Starlight railroad."

The wine is a Starlight Coast Petit Verdot from California.

So three links to Jack Kerouac and On The Road.

Since I bought the paperback I started to read the book again, but somehow it no longer has the appeal. I'm not sure if I'll even bother to finish it. Sometimes, perhaps, it's best not to revisit things but to retain the version already stored in your memory instead.

But I shall drink the wine!

P.S. I put the radio on, after finishing this post, and Willie Nelson was singing On The Road Again! And that's before I've drunk any of the wine ...