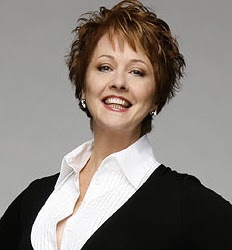 Here's a ghost story from the UK television and radio presenter Anne Diamond. It's all a bit bizarre because, despite the tale that follows, Anne still says, "I don't believe in ghosts. Never have." See what you make of this:

Back in 1999 Anne Diamond got divorced so she was forced into looking for somewhere to live for herself, four children and a nanny. Registered in the normal way with an estate agent she received a call from him with information on a large Victorian property that had just come on the market. It hadn't as yet been circularised, so Anne would be the first to view.

Arrangements were made for her to visit the house near Warwick Castle. It sounded perfect as it was large and included a 'granny annexe'.

The house was approached through double gates and she made her way to the front door. It was opened by an elderly white-haired lady who was happy to show her around her imposing home.

It turned out that the lady had brought up her children in the house who, now as adults, were pressing for her to move to somewhere smaller, perhaps a retirement flat.

Anne loved the house and straight away contacted the estate agent with an offer at the full asking price. She had found her ideal home.

A week later, however, the estate agent was in touch again to tell her that the owner had changed her mind and had decided not to sell.

It was back to square one and for six months Anne searched for suitable properties. Until, that is, the estate agent phoned her to say that the house near Warwick Castle was back on the market. What's more it was empty and ready for a quick sale.

The agent agreed to give Anne the keys to the property so that she, along with her mother, could have another look at the house.

She drove up to the double gates, which she had to unlock, and she and her mother walked towards the front door. As Anne fumbled with the door key it was opened and the elderly white-haired lady was there to welcome then in.

She told Anne, "You know the layout, I'll leave you to show yourself around." And with this she shuffled off towards the kitchen.

Anne and her mother started their tour upstairs with the bedrooms. As everything was now unfurnished it felt eerie and strange. It was beginning to get dark so they tried to switch on the light but soon realised that the electricity must have been cut off.

They made their way downstairs and called out to see if the old lady had a torch so they could look quickly at the downstairs rooms. There was no one there. How strange that she had abandoned them in the dark.

Anne's mum sat down in the living room and said, "We can't really see anything now but I can tell you it's a wonderful house."

It was then that Anne realised that her mother was sitting on something - but everywhere else was empty. This spooked them both. What her mother had been sitting on was was a large object, like a wardrobe on it's side. But her mum decided, "It's the shape of a coffin."

The two women quickly left the premises, got into their car and drove away without bothering to re-lock the gates.

The next day Anne returned the house keys to the estate agent and apologised for not locking the gates.

Anne explained, "The agent was adamant: no one could possibly have been there to let us in. There were no neighbours with keys. I had the only set."

He then went on to say that the elderly lady - she had seen on her first visit - had died suddenly and the house had been completely cleared by her children. There was definitely no box in the living room.

The agent insisted, "The place is totally empty I assure you."

He took Anne to revisit the house and in the sunshine it felt welcoming. Anne noticed that the living room was empty, there was no coffin shaped seat.

Anne told the agent that she wouldn't be making an offer for the house.

As she was getting into her own car the local postman walked by and asked her if she was going to buy the house. He went on to tell her that the house had been, "... with the same family for years and years. But it was very sad how the old lady died. She was in the house for two weeks before anyone found her. In the end they had to break in - and there she was, just lying dead on the living room floor."

The question is: Who did Anne and her mother see when they visited the house together? The ghost of the elderly owner? Maybe still clinging to the home she obviously loved, which was full of memories.

But that doesn't explain the mysterious coffin like box in the living room. Was this a symbol of death?

Surely Anne and her mother didn't simply imagine any of this. Anne said, "Perhaps she returned ghost-like, to show me around one last time."Despite it all, as I said at the beginning of this post, Anne still doesn't believe in ghosts - most bizarre!

Other Ghostly Posts:
The Unusual Contact With Her Dead Mother
12 Ghostly Ghost Story Experiences
White Feathers And A Special beach