Twins Clairvoyance And A Dream 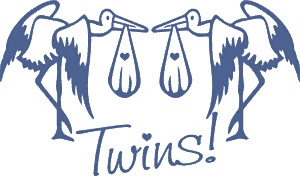 This is a personal story that for some reason came to my mind this morning. I'm not sure what triggered the memory. It covers coincidence, clairvoyance, a dream and maybe reincarnation or history repeating itself.

After my wife, Karin, and I went out together for the first time she went with a friend to see a clairvoyant.

At the time both of us had recently come out of other relationships so I don't think either of us thought that we would still be together thirty years later.

She didn't tell me this at the time - it might have frightened me away!

Later we did move away together. I was offered a promotion with a company I was working for but it meant I had to move to another part of the country. And to cut a long story short I accepted the offer and we eventually got married.

Eighteen months later Karin was pregnant but sadly had a miscarriage. This was before scans were routine and it was only after we lost the babies that we discovered they were twins.

Needless to say we were both quite upset. The thought of twins stuck in my mind and my own mother told me, at the time, that my grandmother also had twins who died. She went on to have more children as did we.

Years later, after we had our son, Karin had a very vivid and 'real' dream. And it was this dream I remembered this morning.

In the dream Karin said she and I were in the garden with all of our family. It was like a reunion or a party. Amongst those present were two boy twins about five years old. My wife couldn't think who they were in her dream but they were playing happily with our son and other family children.

I mentioned the dream to Karin over breakfast this morning and she said about how, perhaps, they were the twins we had lost.

She then told me her father was one of twins. This was something I hadn't heard before, despite 30+ years of conversations! Probably because I had never met her father as he had died when she was only four years old.

Her father's twin brother died at birth and it was touch and go if he lived. He was seemingly so small that he could fit into the palm of the doctor's hand, but somehow he survived.

And that's the story really. It's strange though, how my grandmother lost twins, Karin and I lost twins and her own father was the survivor of twins. I'm not sure, as yet, what this all means but there must be some sort of link with the dream and also the clairvoyant 'seeing' twins.

I guess we aren't meant to understand everything.

"If a man could pass through Paradise in a dream, and have a flower presented to him as a pledge that his soul had really been there, and if he found that flower in his hand when he awake — Aye, what then?
- Samuel Taylor Coleridge"