The Dancing Ghosts On The Jurassic Coast 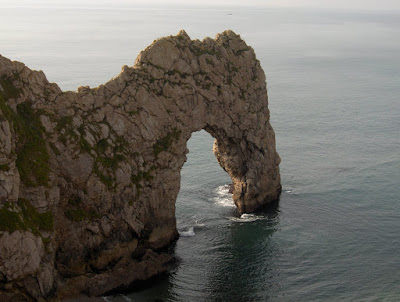 We had a bit of a trip along the coast from where we live in Cornwall to Dorset. It was a bit hazy but we ended up walking along the coastal path past Durdle Door - that's the natural arch in the photo above. On a sunny day this is a lovely walk over the cliffs. It is also part of what is known as the Jurassic Coast, which is a World Heritage Site.

The Jurassic Coast is so called because of the amazing fossils, millions of years old, which have been found by the cliffs and on the beach. It's an amateur fossil hunters paradise.

The two photos below show the coast line going west from Durdle Door.

Durdle Door also has its very own ghost or ghosts but, even though it was hazy, we didn't manage to see or hear them. Many have though.

The first sighting was by a sailor moored just off the coast. He heard screams coming from the shore and saw phantom women dancing on the beach.

It is believed the screams are those of maid-servants who escaped from nearby Lulworth Castle when it was burnt to the ground in 1929. They headed for what they thought would be safety at Durdle Door, but were swept out to sea by the tides and they all perished.

Restoration started on the castle in the early 1970s. 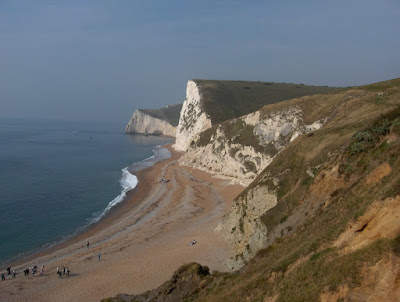 In an easterly direction, along the coastal path is Lulworth Cove, as in the photo below. Unfortunately, because of the unclear weather, the photos don't show the area off to its best. But if you are in the area it's a great place to walk and take a small hammer with you for fossil hunting - you never know what you may find. 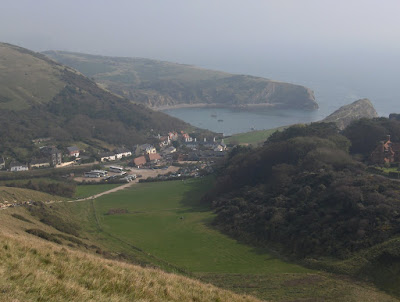