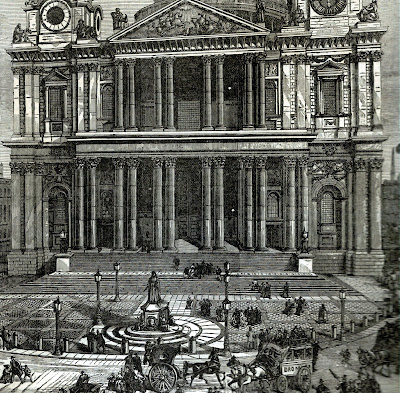 Nothing too dramatic today but an illustration of how subjects, coincidences if you like, come about in clusters. I received an email regarding a post I wrote about St Paul's Cathedral during World War II.

From then on St.Paul's seemed to be everywhere I looked - perhaps a slight exaggeration but I became aware of lots of other stuff about the London Cathedral in books, papers and on television.

For example, as I have written previously, I like old books and sometimes buy them at flea markets, car boot sales and so on. I opened up one of the books and on the page was an engraving of St.Paul's from the 1880s - picture at the top of this post.

Later that day I opened another book, from the 1980s, and there was the photo below. A virtual duplicate picture but from a completely different era. Note how even the clock on the right has been cut in half. 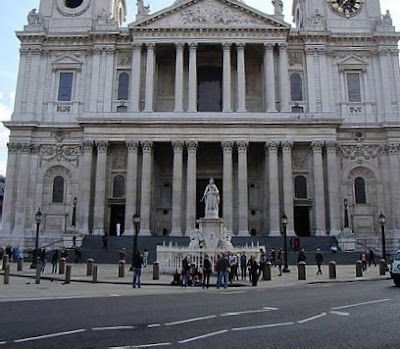 The newspaper I often read had an article which mentioned the Whispering Gallery at St Paul's:

"Climb 259 steps up the dome and you will find The Whispering Gallery, which runs around the interior of the Dome. It gets its name from a charming quirk in its construction, which makes a whisper against its walls audible on the opposite side."

This reminded me of when a small child I visited St.Paul's Cathedral with my mother. We went up those steps and did the whispering thing: she on one side and me far away on the other. Amazingly to me, a small child, we heard each others whispers.

360 degree view of the High Altar

And so St Paul's Cathedral was brought to my attention time and time again. But why? This is something I haven't figured out as yet. Maybe it was simply a reminder of days out with my mother.

St.Paul's Cathedral Protected by A Hidden Power In WW2