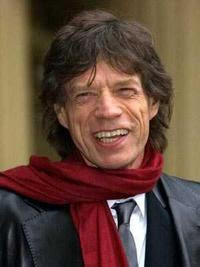 This is something I came across yesterday: an attitude towards life. It's in the words of Rolling Stone Mick Jagger - quite a deep man in some respects.

Mick has been putting together an album, SuperHeavy, as part of a 'super group' which includes the likes of Dave Stewart, AR Rahman and Damian Marley (son of reggae legend Bob).

Invariably though, when he is interviewed, reporters want to look at the 'old days' of the Stones and this is what he replied:

"Don't look back. I live in the now. But I don't ever think, 'This is amazing, I can't believe I'm still doing this.' I am doing it. I'm just doing it. And I don't think, 'It's all gone so fast', because for me it's still happening. When I started it was a different century and it seems like that. You move on, it's all good."

Mick went on to say, "You watch what you eat, you exercise, you have a bit of fun. You keep going forward. Don't stop. Do what makes you happy. Don't look at the clouds of tomorrow through the sunshine of today. That's it."

Email ThisBlogThis!Share to TwitterShare to FacebookShare to Pinterest
Labels: Positive Thinking, Thought Of The Day