The Reincarnation Of A World War I 1914 Soldier 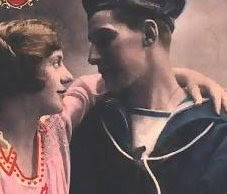 Here's a regression story from Terry Thomas, though he describes it as therapy. He feels that his experience proves reincarnation. See what you think.

"It was of a woman of about forty-five years old, dressed in early century style, sitting at, but not playing, a grand piano, which was in remarkably old wood. Standing in front of a heavily draped window was a man of a similar age. Neither of them was talking, but seemed to be in deep thought and very sad.

My gaze kept looking at a large painting, which I could not make out, only an eye of someone in the painting.

Terry was then returned to the present time feeling very self conscious because he had been crying so much. He was left with the feeling that his previous name - as the distressed man - was John.

At a later date Terry went to see a medium.

He told me that a person called John was with him and he was a gunner aboard a ship during the 1914-18 war. He said he wanted me to know his death was an accident. The medium said he could actually see the accident happening. The gun blew back right into John's stomach, blowing a hole in it.

Terry talked this over with his mother and family and he finally came to the conclusions that:

(a) "The John told me by the medium was my own self of my last life. Which proves to me the medium concerned was in fact reading, unwittingly my subconscious, which nevertheless was a credit to him."

(b) "The investigations, with my mother and family led me to believe I was a relative of my grandfather's brother in my previous life."

The sadness Terry felt in his regression was because the two people in the 'picture' were his parents in that former life. He had gone to war without their permission and they were sad because he had been killed.

"You see there was no need for me to go to war as I was far too young, but did so against their (his parent's) wishes and on the understanding I would not be going into active service.

This was why Terry was saying 'sorry' in the regression.

Reincarnation is always a controversial subject and regressions usually fail to convince the skeptics. The pictures or experiences seen by those being regressed are often considered to simply be stories from the unconscious mind.

Personally reincarnation, linked with karma, is one of the answers to all of the unfairness in the world. Even the Christian Bible talks of an 'eye for an eye' and did, originally, seem to be on the side of reincarnation.