The Red Rose Seen In Space 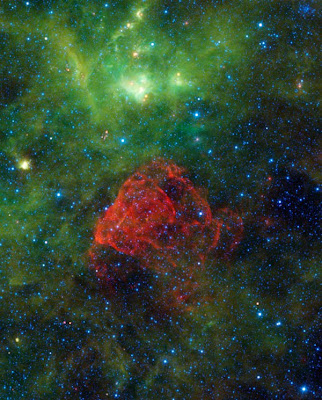 This is one of those photos that blows my mind - a red rose in space.

It's not a red rose, of course. It's a photo from NASA.

A star ended it's life with a powerful explosion. The shock waves heated up the dust and gas clouds surrounding the supernova causing them to glow, thus creating this beautiful red cloud- and this is the red rose.

And, to quote NASA: "Much of the material from that original star was violently thrown out into space. However, some of the material remained in an incredibly dense object called a neutron star. This particular neutron star (too faint to be seen in this image) is moving inexplicably fast: over 3 million miles per hour! Astronomers are perplexed over its absurd speed, and have nicknamed the object the Cosmic Cannonball."

Sort of puts life into perspective, doesn't it?  Here we are little specks of dust, full of self  importance, with lives on earth that are over with a blink of the Universal eye.

Email ThisBlogThis!Share to TwitterShare to FacebookShare to Pinterest
Labels: space, Thought Of The Day