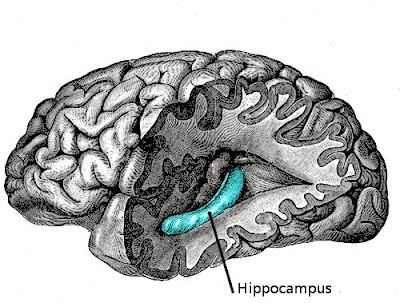 Psst! Would you like a bigger posterior hippocampus? That may sound like one of those dodgy emails but London Taxi drivers have a bigger hippocampus, therefore, so can we.

It's no easy job to become a licensed black cab taxi driver in London.  In fact it usually takes between two to four years to learn, what is known as The Knowledge.

To acquire The Knowledge means prospective taxi drivers have to learn the complex layout of central London’s 25000 streets and thousands of places of interest. What a study has found is that this feat of learning causes structural changes in the brain and changes to memory

Professor Maguire and colleague Dr Katherine Woollett - of the Wellcome Trust Centre for Neuroimaging at the University College, London - followed a group of 79 trainee taxi drivers and 31 controls (non-taxi drivers), taking snapshots of their brain structure over time using magnetic resonance imaging (MRI) and studying their performance on certain memory tasks. Only 39 of the group passed the tests and went on to qualify as taxi drivers, giving the researchers the opportunity to divide the volunteers into three groups for comparison: those that passed, those that trained but did not pass, and the controls who never trained.

The researchers examined the structure of the volunteers' brains at the start of the study, before any of the trainees had begun their training. They found no discernible differences in the structures of either the posterior hippocampus or the anterior hippocampus between the groups, and all groups performed equally well on the memory tasks.

Three to four years later - when the trainees had either passed the test or had failed to acquire The Knowledge - the researchers again looked at the brain structures of the volunteers and tested their performance on the memory tasks. This time, they found significant differences in the posterior hippocampus. Those trainees that qualified as taxi drivers had a greater volume of grey matter in the region than they had before they started their training.

This change was not apparent in those who failed to qualify or in the controls. Interestingly, there was no detectable difference in the structure of the anterior hippocampus, suggesting that these changes come later, in response to changes in the posterior hippocampus.

"The human brain remains 'plastic', even in adult life, allowing it to adapt when we learn new tasks," explains Professor Maguire. "By following the trainee taxi drivers over time as they acquired - or failed to acquire - the Knowledge, a uniquely challenging spatial memory task, we have seen directly and within individuals how the structure of the hippocampus can change with external stimulation. This offers encouragement for adults who want to learn new skills later in life."

This has shown that any intensive learning - even as adults - can trigger changes in the brain.

So, if we want a bigger posterior hippocampus we know what to do. It's never too late to improve the brain by learning something new.

Email ThisBlogThis!Share to TwitterShare to FacebookShare to Pinterest
Labels: brain, Memory, self improvement