Receiving White Feathers From The Dead 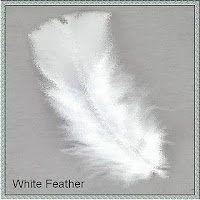 I have written a few posts about White Feathers and how they may well be a symbol or a message from those who have died. From time to time I get stories from other readers about how white feathers have brought them comfort when they have lost a loved one.  Here are a few such stories, some of the writers wish to remain anonymous.


I have lost a close friend and had three funerals in the last three months which has been difficult.

After the funeral of the premature and sudden death of my friend, two feathers were on the floor of the car, no idea how they got there. Then a few days later, I was speaking with one of his other close friends on the phone. She was still in shock. I then left the house to go shopping and next to my car on the bush, there was a small white feather. It gave me comfort so I have it on my bedside locker now.

I am sure there is some link to the afterlife and this is a good one.
Kerkedijk


I lost my 21 year old son almost 2 months ago. He died after having a seizure in the shower.

Last night I was reading a book while having a bubble bath. I decided to finish the book in bed. When I opened the book, there was a big fluffy white feather on the very page I had stopped reading. I was blown away. I never took such things seriously before.

I cannot find any other explanation though, other than it was placed in a closed book by a spirit, my son's I believe.
Anonymous

I write because a friend forwarded your blog-link.

Funny, now that I'm 63 I can't remember when I started seeing the white feathers. [I've got a little homestead we call "White Feather Ranch."]

Anyway, my brother had committed suicide, our family was in pain and I think they probably started falling then and ever since they have just shown up and I've really never connected them with any particular event or thought that I can remember. [It is getting harder these days! My sisters may have a better recollection...ha!]

Anyway, I can remember sitting at a pool telling my sister about the white feathers when, out of the blue..ha, one floats down from nowhere. Yes, these are indications of some sort. Shall we investigate? Or, just let them underscore our delight! This is what I shall always do...delight in their existence in my life!
Caryl~Marie


Hi Our baby girl was born sleeping last week and my partner just walked outside and a white feather flew down in front of him. I looked on the net and found your post, its lovely to think its her.
Anonymous


I'm a manual worker, a bricklayer, so I work in a hard environment. I only say this to show that I'm no tree hugging hippy.

My mother died of cancer. She was 58 and it hit me real bad. My brothers seemed to be able to take it in their stride but I couldn't and even went to see a medium. The problem was that I arrived at ma's house about half an hour after she had died. I got stuck in traffic but my brothers were there. They say that she asked why I wasn't there.

The medium played a guessing game and was no help at all. Then I looked at the Internet and came across this white feather business. This helped because I remember that the day after ma died there was a white feather on my tools at the building site. A big fluffy one.

After I read about this sort of thing happening on the Internet I've noticed and found lots of white feathers. There was one in my conservatory last night. I've no idea how it got there as all the doors were closed. I'm beginning to believe that these are messages from ma to say she's OK and she forgives me for not being with her when she died. I hope so.
Jimmy

Email ThisBlogThis!Share to TwitterShare to FacebookShare to Pinterest
Labels: Life After Death, White Feathers and Angels