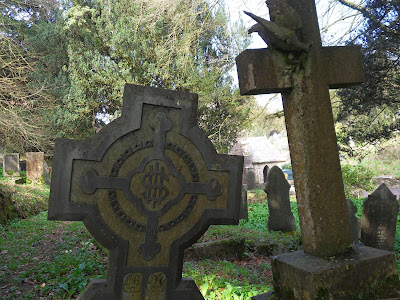 Back in march 2011 I published a post The Mystery Of The Celtic Cross With A Dollar Symbol. At the top of the post was the photo above showing, what I took to be, a dollar sign but with three lines through the centre as opposed to the normal two.

I wondered what the symbol meant. I couldn't find an answer on Google or anywhere else until that is yesterday when an an anonymous comment was left which simply said: 'It means I Have Suffered three letters overlapping, I H S.'

Now, that sort of made sense and I found out that this could have referred to say Psalm 119:107 in the bible. This reads "I have suffered much; preserve my life, O LORD, according to your word". This would make sense to be on a gravestone. But this is only one translation of the Bible , some have differing interpretations.

Then I got more confused as I read a blog post on Restless Pilgrim which claims that IHS stands for the name of Jesus taken from Greek.

According to the website mentioned Jesus in Greek is ΙΗΣΟΥΣ - the first three letters being iota, eta and sigma which when translated into the English alphabet becomes IHS.

So now I'm confused as to what IHS actually stands for, especially when I also discovered that it originated from the initials of Isis, Horus and Seb, and these somehow crept into Christian early churches.

I next came across the following cartoon, knocking the Catholic religion, which again shows IHS and where it (may have) originated. 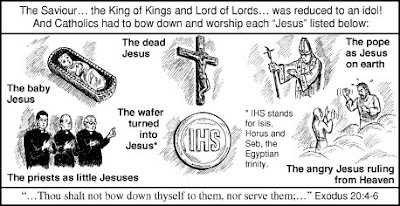 It looks to me that the symbol I saw at the graveyard could well be the letters IHS overlapping, as per the anonymous comment. The only problem is as to what it definitely means. As it was by a Christian church it could easily be either I have suffered or Jesus' name.

But this is an illustration of life. We think we may well have an answer to what it is all about when more and more ideas, suggestions, solutions are placed in front of us. It's a long, winding road. Let's hope it finally reaches somewhere perfect.