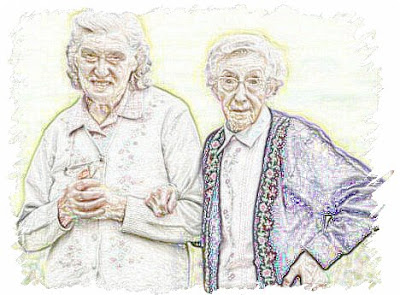 I came across an interview given by author David Conway. He wrote, amongst others, a very informative book called Magic: An Occult Primer

which I read in the early 1970s. I still have the book today and, in the post Magic Talisman Attracts Money, I tell of how talismans I made - following David's instructions - attracted lots of money to my wife and myself.

Anyway, in the interview, David talks of an experience he had as a child.

"Every night after my mother put me to bed, two elderly ladies would appear at my bedside.  The taller one would stand back a little, while her companion made a big show of nodding and smiling and blowing kisses in my direction. At some point one of them, usually the taller woman, would lean over and tickle me.

Every evening without fail, thin, bony fingers would reach down and begin the same relentless tickling while I, powerless to stop it, thrashed about in bed.

Throughout it all my tormentor's expression stayed blank, disconcertingly so, with no hint of a smirk or scowl, just a mindless, unflinching resolve.  Apparently my screams could be heard outside in the street.

Night after night my parents would try to persuade me it was all a bad dream, but some weeks later I was taken off to see our elderly family doctor."

David explained to the doctor what he saw:

"I went on to describe them in detail and even provided him with their names, as well as diminutives that they encouraged me to use."

It was recommended that David's bed should be moved to another room. After this the visits stopped and never returned.

Only several years later did he find out what the doctor had told his parents:

"Years earlier, it seems, he (the doctor) had attended two patients in what was now our house, elderly sisters now long dead.  Not only had I described them in remarkable detail - their hair, their clothes, even the consumptive cough of the older woman - but I had given him their names as well as the pet names each used for the other. A mystery he called it."

But was it really such a mystery as David has been quoted as saying, "Reality, as we know it, is more, far more, than what we ordinarily perceive."

Source: The Book of English Magic