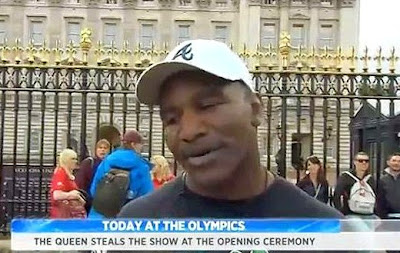 I hadn't heard of this story here in England, but this happened following the opening ceremony of the London Olympics.

The New York Daily News reported on the NBC London based coverage:

"As part of its Olympic coverage, the Today Show stopped random people in front of Buckingham Palace to ask about Queen Elizabeth’s performance with Daniel Craig during the opening ceremony. Among them was a man in a white baseball cap and blue T-shirt who called the Queen 'wonderful'."

What none of the NBC team noticed was that, by coincidence, the man they had asked at random, wearing the white baseball cap, was none other than heavyweight boxing legend Evander Holyfield.

"Look, the @todayshow did a good job. It was hard to recognize me with the baseball cap. This could happen to any reporter. LOL!!"

"Hopefully when I get on the @todayshow they will remember who I am! I won't be wearing my white baseball cap! LOL."

Evander Holyfield won a bronze medal in the 1984 Olympic Games in Los Angeles.

Other Sports Posts:
The Inspiration Of The Paralympics And 7/7
Golf Hole In One Coincidences
Fox Hunting And Boxing Day