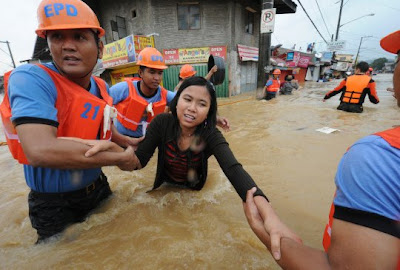 As we know coincidences occurring in a meaningful manner is often described as synchronicity.

Trying to decipher any meaning behind coincidences can sometimes bring about some strange conclusions. Take for instance the recent severe Metro Manila floods in the Philippines.

The storms that caused the heavy rainfall weren't expected by PAGASA - the Philippine Atmospheric Geophysical & Astronomical Services Administration whose job it is to warn of such possible happenings.

"So where is the coincidence?" you may well ask.

The answer is in the Bible. It was noted by many that Genesis 8:7-12 describes how Noah - following the Biblical floods - sent a dove to investigate the extent of the great deluge. The dove returned to the ark, signifying that the flood waters have not yet receded.

The website for the Filipino Global Community were quick to seize on this. They told their readers to:

"Open and read the Bible or your history books and you will see that God always intervenes when it is necessary or worse, when God is already fed up with the evil that has captured the hearts of the people. You know too well the story of Sodom and Gomorrah or the Battle of Lepanto and yes, who could forget the Great Flood, where the people ridiculed Noah for building the Ark. To us who see things with the eyes of faith who fought against the Reproductive Health (RH) bill, God has shown his displeasure with a flood."

So the website knows how God is thinking and the floods are all down to God no approving the RH bill.

This is what Wikipedia writes about this RH bill:

"a ...key proposal is that the Philippine government and the private sector will fund and undertake widespread distribution of family planning devices such as condoms, birth control pills (BCPs) and IUDs."

"Of course, to the eyes of the unbeliever, all this is a simple matter of coincidence. But for those who see things from the eyes of faith it is the wrath of God."

There we have it an interpretation of the coincidence between the date of the floods and the Bible verses quoted. QED? I don't think so personally.

It's up to us how we interpret coincidences and synchronicity in our lives - but sometimes it takes a bit of fathoming out before we get the right answer. I don't feel we should match synchronicity with what we want to hear.

As for the Philippine RH bill that is for them to decide.