The Gorilla Brothers Who Recognised Each Other 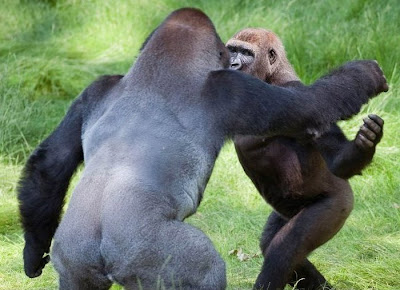 Kesho and Alf are two gorilla brothers, both born at Dublin Zoo. They were separated three years ago when Kesho was packed off to London Zoo as part of a breeding programme. He became the dominant male at the zoo and developed into a 35 stone silverback.

This week Kesho and Alf were reunited at Longleat Safari Park in Wiltshire where they will now live together. The question was would the brothers recognise each other after their time apart?

The two not only recognised each other, they met with wide open arms before embracing in a big hug. This was followed by handshakes, shoulder squeezes and a bit of friendly rough and tumble.

But why the doubt in recognising each other? They do, after all, share 98% of their DNA with us humans.

The head gorilla keeper at Longleat is quoted as saying: "We weren't entirely sure that the brothers would even know each other, but the moment they met you could just see the recognition in their eyes ... it was quite unusual to see that sort of childlike behaviour in a silverback."

Sometimes I think we way underestimate our animal friends.

Other animal stories on 67 Not Out:
Animals Have Feelings Too And Share Pain
The Psychic Power Of Dogs
Attention Seeking Funny Animal Pictures