The Formula For A Healthier Sexier Life 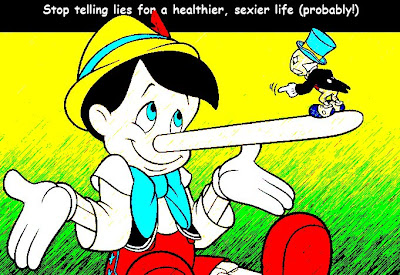 This is about something I read about in a newspaper, so it must be true!

Don't believe me? That's okay, but I wouldn't fib because lying affects our health.

It appears that the American Psychological Association has recently presented a new study all about lying.

A group of 110 volunteers, aged 18 to 71, were gathered together. 55 were told that they had to stop lying for ten weeks.

The other 55 were the control group who weren't given any instructions or info and carried on life as normal. They carried on lying - and, let's be honest most of us tell a few porkies now and again. There are always circumstances where we think it's okay to distort the truth, perhaps to save someone's feelings and so on.

After the ten weeks was up the statistics were collated. It was found that the non lying 55 volunteers had fewer physical complaints such as headaches and had better mental scores than the control group.

The researchers credit the positive findings to fewer stress hormones being released every time we lie.

So to improve our health, it has to be no more lies. Oh, and according to blogger Eirini Haritou not telling lies will make you sexier! In truthful mode, I can't promise that this is true but this is her reasoning:


"The stronger your immune system,the more attractive you appear.


- The more lies you tell,the weaker your immune system.

Looks like we now have a formula for a healthier sexier life. Can't wait!

Other Random 67 Not Out Posts:
Woman Donates A Kidney To A Stranger
How Rituals Combined With Action Can Cure Illness
How Leaf Cutting Ants Look After Their Old

Email ThisBlogThis!Share to TwitterShare to FacebookShare to Pinterest
Labels: Healing, Health, self improvement