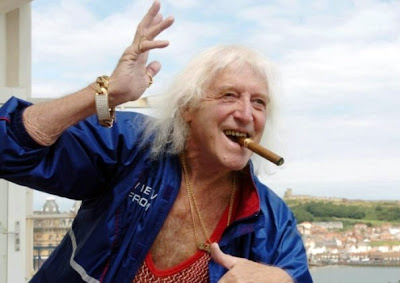 Things really do get covered up. Roswell, 9/11, 7/7 in England and so on all have 'conspiracy' theories about what 'really' happened. "But it's not possible, surely someone would have indisputable evidence," many will say.

But, as I've already said: Things do get covered up. An example of this is the revelations about Sir Jimmy Savile in the UK.

For those in other countries Savile was a broadcaster, television show host and famous celebrity or personality for over 40 years. He raised massive amounts for charity - over £40 ($56) million. He was friendly with Prince Charles and Princess Diana, was knighted for his services to charity by Queen Elizabeth II and received a papal knighthood from Pope John Paul II. He had his own room in Stoke Mandeville Hospital, a set of keys to Broadmoor Prison - unbelievably true!

He seemed a real good guy, though perhaps a bit eccentric with his cigars, gold chains and gaudy tracksuits.

Savile died last year at the age of 84.

It has now come to light that he was actually a rampant paedophile.

Over 200 alleged victims are being investigated with some sources saying up to 1000 children - girls and boys - may have been sexually abused by Savile and perhaps other 'personalities'. Claims have already been made against the ex pop star Gary Glitter and a famous older British comedian. Other names are also being bandied about.

For over 40 years Savile 'got away' with the things he did. Many of his television shows were aimed at children, like Jim'll Fix It where he made their dreams come true - and it now appears some of their nightmares as well.

It's a horrific story and the well respected BBC television and media organisation are accused of having turned a blind eye to allegations of Savile's behaviour – some of which are said to have occurred on its premises to children Savile had met on his shows.

He is said to have abused sick and disabled children at Stoke Mandeville Hospital - the hospital that just happened to be a beneficiary of millions of pounds raised by Savile and where he had his own bedroom. The hospital has indicated that it has 'no record' of complaints about him.

How on earth did he get away with such things for 40 years? Money, power and the smoke screen of the masses of money he made for charity seems to have done the trick.

In the world at large much is being covered up. Powerful people really do rule the world and run things as they wish, while the masses are told that we must all pull together to sort out the financial mess most countries are in.

We have to be aware that we are being manipulated. If someone like the obnoxious Jimmy Savile, a relatively small cog, can deceive just think what others can do.