A Message From The Harry Potter Owls 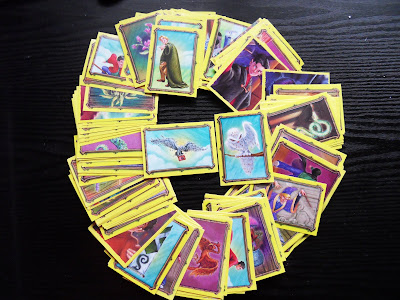 Yesterday I wrote about Harry Potter and the Rosicrucians. A couple of the images I used for the post were of Harry Potter collectors' cards.

I actually bought the cards - about 250 of them - from a charity shop for 20p (28c) the day before I had decided to write about that particular subject. So just a 'coincidence' that I bought them - don't know why I did, as I'm not a Harry Potter fan or anything like that.

When I looked at the cards the top two were of owls. Strange as Karin and I had been talking about how we had heard an owl each evening recently. He (or she) seems to visit the trees near our house, stay for a while and then disappear for months. 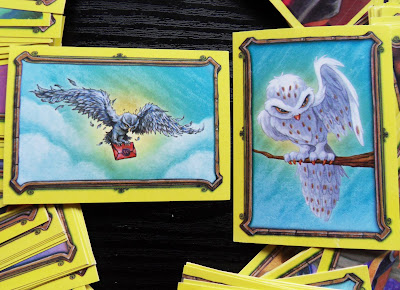 But even stranger was that, while looking out of our upstairs window - in the early afternoon - we saw an owl sitting on a neighbours roof. We've never, ever seen an owl near where we have lived previously, only heard them.

So it seems that owls are the creatures of the moment for me! Especially when, later, we went into out local town and there were owls on display from a Cornish owl sanctuary who were raising money for their work. 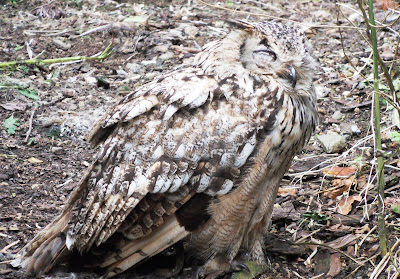 The owl sanctuary provides, "care and rehabilitation for sick and injured wild owls in Cornwall. They then ensure their safe release into the wild on recovery or, if permanently disabled, provide a comfortable home in a suitable environment."

So many owls! But what do they mean or symbolise?

The owl is said to be the keeper of spirits who have passed from one plane to another. Often the owl will accompany a spirit to the 'underworld'.

Native Americans and Australians are said to view them as keepers of sacred knowledge and witches and wizards are also associated with owls.

I'm not sure what my apparent link with them is at the moment, but I do have two owl ornaments in my office: a paper weight and a vase where I keep scissors, pens and the like. 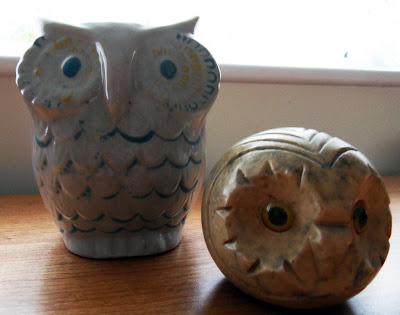 I looked on Yahoo! answers where someone was asking about the meaning of seeing owls. This is part of the answer given:

"If an owl has visited you, an incredible gift has been bestowed. Also, keep in mind that animals are only called to those who share the same energy. In other words, you hold within you some of the very same symbolic attributes the owl represents.

Owls also show themselves as a sign of warning (no, not of death). You simply need to pay close attention to people around you - owls are incredibly perceptive - you are probably perceptive too - use your powers of perception around new people you may meet. Not everyone is as nice, or 'cool' as they seem to be."