Buried In A Coffin But Able To Communicate With The Living 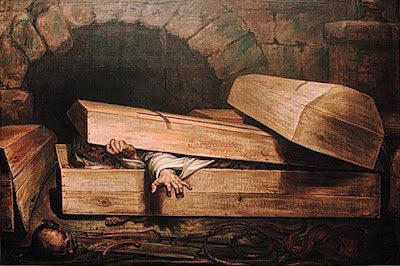 There is an Urban Myth that goes something like this:


In the 1500's England started running out of places to bury people. So, they would dig up coffins and would take the bones to a house and re-use the grave.

In reopening these coffins, one out of 25 coffins were found to have scratch marks on the inside and they realized they had been burying people alive.

So they thought they would tie a string on the 'dead' persons' wrist and lead it through the coffin and up through the ground and tie it to a bell. Someone would have to sit out in the graveyard all night to listen for the bell. Hence on the 'graveyard shift' they would know that someone was 'saved by the bell' or he was a 'dead ringer'.

The strange thing with this Urban Myth is that it is partly true, though the date is perhaps a little askew.

In the 1700s and 1800s, during cholera epidemics, people became worried about being buried while they were still alive. This inspired Edgar Allan Poe to write The Premature Burial. Published in 1844 it contained accounts of what are said to be genuine cases of premature burial.

It was about this time that safety or security coffins were invented. Most of these were simple devices which would allow the 'dead' to communicate with the outside world - if it turned out they weren't actually dead, if you see what I mean.

The buried person was attached to a bell above ground by a chord affixed to his or her wrists and legs. Any movement would thus make the bell ring.

The best known safety coffin was created in 1829 by a German, Dr Johann Gottfried Taberger.

With Taberger's system the corpse would have strings attached to its hands, head and feet. A housing around the bell above ground prevented it ringing accidentally. This was an improvement over previous designs as the housing prevented rainwater from running down the tube. It also had netting to prevent any insects entering the coffin. If the bell rang the night-watchman was instructed to insert a second tube and pump air into the coffin with a bellows to allow the occupant to survive until the casket could be dug up.

This was all well and good but the natural process of decay can cause the body to swell or shift position and would thus make the bell ring. To overcome this Taberger created a second tube to the corpse's face so that the night watchman could take a peek to see if the person was still alive.

The safety coffin seems to have died a natural death. Hopefully, modern medicine now knows if someone is definitely dead ... Now I wonder if there was ever any safety coffins for cremation ...


Frederic Chopin, the composer, had taphephobia - a fear of being buried alive - and insisted that his own heart should be removed on his death prior to burial.

Other 67 Not Out Posts:
Maat And The 42 Principles Of Life And Death
Is There Life After Death?
A Chaffinch And Poems Exhumed From The Grave