Step Into The Magic And Strange Things Happen 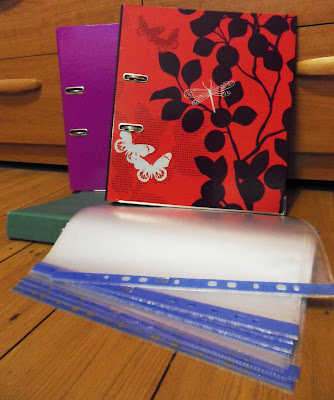 I'd forgotten this until yesterday. It's one of those odd little things that come about by what appears to be almost a magical coincidence.

A few weeks back we found a bag of brand new folders on our driveway - as per the photo above, there was also another big colourful folder but I've now used this for my two year old grandson's drawings and pictures.

I've no idea where the folders originated but we left them in a prominent position for three or four days so anyone passing would see them. We also asked our neighbours and also the local gossip but no answers transpired.

After doing our best to find where they had come from we decided it was okay for us to keep the folders.

That may not seem a coincidence in itself but the next day we were walking along our road and there on a grass verge, with no houses nearby was a pack of transparent plastic inserts for the folders. Now that was a coincidence!

As there is supposedly a reason for everything in life I've been wondering why I found these folders and inserts. Perhaps there is something I should be keeping on record. Time will no doubt tell.

It's an interesting old world when you step into the magic.