Light The Bonfire Burn The Guy And Set Off The Fireworks 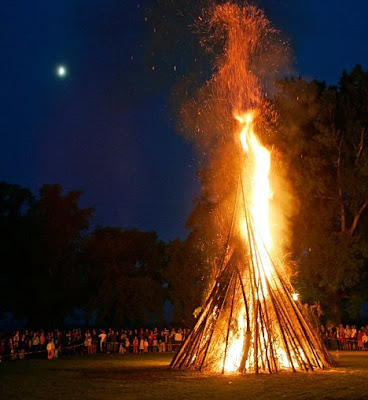 Remember, remember the fifth of November
Gunpowder, treason and plot.
I see no reason, why gunpowder treason
Should ever be forgot.

This is a tradition going back to 1605 and I fear that it is being squeezed out by the sheer, rampant commercialisation of Halloween that has been introduced more and more over the past ten years, in what I call, the Americanisation of Britain.

Shops, stores and supermarkets see Halloween as a cash cow and it has subsequently become the second largest boost to their profits after Christmas. But I like the old traditions of each country. I don't want us all becoming identikits of each other.

As I said Guy Fawkes Night goes back to 1605 and the Gunpowder Plot. Guy Fawkes was part of this and was arrested for guarding explosives i.e. gunpowder which plotters had placed under the House of Lords. As the plot was foiled King James I was saved from an attempt on his life. To celebrate this bonfires were lit in London.

In later months an Act of Parliament was introduced to make the 5th of November a public day of thanksgiving for the plots failure.

There are deeper levels to all of this as religion had a play to part between Catholics (the plotters) and Protestants (The King's men) but, hopefully, that is long forgotten.

From my childhood I remember us kids building a huge bonfire - to be lit by our parents in the evening - and making a guy out of discarded clothes stuffed with paper and old rags. We would also take our guy out and about asking passers-by for 'a penny for the guy'. Any money collected would be used to buy fireworks.

In the evening the guy was placed on the bonfire and burnt while the fireworks were let off. It was an important, memorable occasion each year. Now, what with Halloween and Health and Safety Regulations gone mad, the tradition of  over 400 years is gradually becoming less and less significant. History seems no longer to play a part in modern life but I shall light a few fireworks regardless.