The Great Spirit Allowed Choctaw To Repopulate The Earth 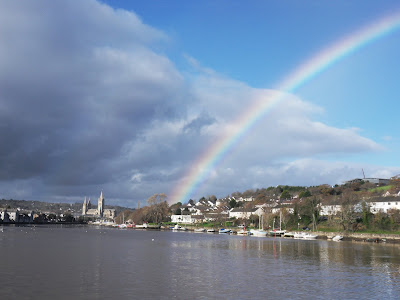 We were in the city of Truro a couple of days ago where I took these photos of a rainbow. We were sitting by the river with Truro's cathedral in the background. 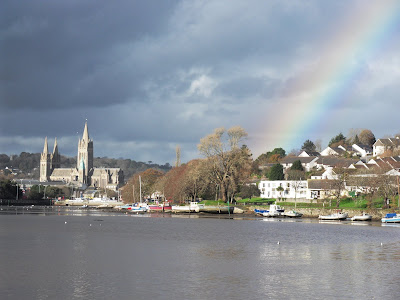 The rainbow was so clear and bright and reminded me of what I had been reading recently about Noah's floods, and how God supposedly used the rainbow as a covenant to show that He would never destroy mankind and the Earth by another flood. Which is comforting as we have had so much rain this year in Cornwall!

I don't see Noah and the Ark story as being fact but, if you do, that's fine. I do think there may have been dramatic floods throughout our history as there are literally hundreds of such stories in legends and myths. So the idea came from somewhere - probably, in the case of Noah, from Mesopotamia.

The Rivers Tigris and Euphrates flooded unpredictably and these were expressed in several versions of a flood myth which is believed to have found its way into the Hebraic tradition as the story of Noah.

Both the Mesopotamia and Noah floods were seen as divine punishment on the human race - the wrath of the Gods, if you like. Egyptian gods would mete out punishments for wrongdoings whenever they felt it necessary.

Flood stories are found the world over. I quite like this one from North America, which again has Noah like qualities.

The Choctaw tribe tell of how in ancient times humans became corrupt and the Great Spirit destroyed the population by a flood except for one man, a prophet.

The prophet's words of the oncoming flood were ignored by other men so the Great Spirit instructed him to build a raft of sassafras logs.

When the floods came the prophet floated safely on the waters for several weeks. He saw a large black bird circling the raft and asked for help, but the bird uttered a few croaks and flew away, never to be seen again.

After more time had lapsed a small blue bird was seen which guided him to an island. Once on land the prophet was surprised to discover that every variety of animal known prior to the flood had been saved. Amongst the birds he noticed the large black bird that had visited and deserted him while he was on the raft. He named the bird 'fulushto' - the raven. Since that time the Choctaws consider this bird as a sign of an ill omen.

After a few days the prophet saw the blue bird who had guided him to safety and called it Puchi Yushuba.

Once the waters had finally subsided the Great Spirit changed Puchi Yushuba into a beautiful woman who became his wife. Their children repopulated the Earth.

From seeing the Rainbow in Truro it's good to know that it's a sign that we are not all doomed by floods - er, but I guess we could still be wiped out by some other method ... actually I don't think we will. I believe man will live on and will populate other planets one day. In the meantime perhaps we should all be kind to each other so that smaller disasters will be avoided.

Other 67 Not Out Posts:
The Lessons Of Atlantis: The Lost Continent
The First Language Ever Spoken On Earth
God Created Earth 6016 Years Ago