God created the Earth and the beginnings of mankind 6016 years ago. I can be precise because this is what my, very old, family Bible tells me.

Okay, I personally don't see how this can be true but what got me thinking was a television programme I watched last night on creationism.

To quote Wikipedia: "Creationism is the religious belief that humanity, life, the Earth, and the universe are the creation of a supernatural being, most often referring to the Abrahamic God."

During the television programme a group of creationists, all Christian other than one Muslim, visited various experts, professors, and scientists who gave their 'proof' that the Earth is much older, and that mankind has developed because of evolution.

It was interesting that the creationists wouldn't budge from their beliefs, even when one professor wondered how Noah would have managed to get whales onto the ark. But actually I quite admire people who have such faith and have their beliefs sorted. 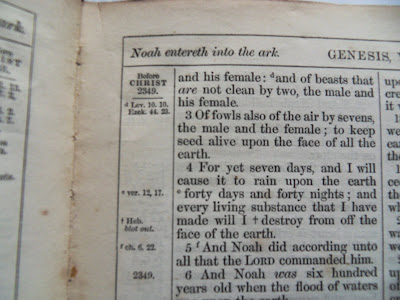 I read some of Genesis this morning from that old family Bible and one thing I'd forgotten was Genesis 1:26 "And God said, 'Let us make man in our image, after our likeness ..."

Does this mean there is more than one God? But, of course, there are many anomalies in the Bible.

Other Religious Posts:
Was Jesus A Vegan
The Mystery Of Jesus Visiting Cornwall In England
The Holy Well Of St Sampson At Golant In Cornwall