How The Earth Has Sent Life To Mars And Jupiter's Moons 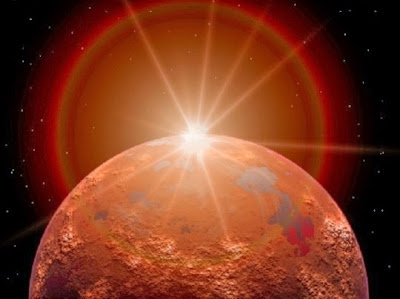 It's often said that an asteroid or meteor crashing into Earth wiped out the dinosaurs - but it might also have done something much more. Researchers now claim that the collision may have also sent rocks to Mars and Jupiter's moons - and these could well have contained life.

The research was undertaken at Penn State University and the results were published in the journal Astrophysics.

The lead author, Rachel Worth, said, "We find that rock capable of carrying life has likely transferred from both Earth and Mars to all of the terrestrial planets in the solar system and Jupiter."

She continued by saying, "Even using conservative, realistic estimates ... it's still possible that organisms could be swimming around out there in the oceans of Europa [Jupiter's moon]. I'd be surprised if life hasn't gotten to Mars ... It seems reasonable that at some point some Earth organisms made it."

It is estimated that the Chicxulub meteor, which brought about the demise of the dinosaurs, sent 70 billion kilograms of rock into space - some of which may have contained 'life'.

To quote from the research paper:


It is known that rock can be exchanged between planets; therefore, if life can survive the transfer, it is probable that life from Earth has already been brought to other planets. Also, it is theorized that Mars may have been habitable during the Noachian period, when the young planet is thought to have been warm and wet.

Once you start thinking about this the possibilities are mind boggling - but it still doesn't answer from where the very first life originated. This is why it's easier to say life was created by a God - but then, as I asked naively as a child - who created God? Another God? And so on.

It's a bit like those Russian Dolls I mentioned in a previous post - you open up one and there's another inside. You solve one question and this leads to another - ad infinitum. Or maybe you eventually arrive back to where you started, there is no beginning or end..

Other Posts:
The Secret Of The 12 Days Of Christmas
A How Did It All Begin Ramble
Did The God Of The Old Testament Arrive In A Spaceship?