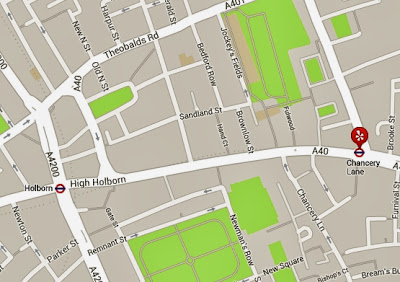 A coincidence story today from Suzie who often leaves comments on my blog.


It is peculiar how some things come about. On your post about the Synchronicity Highway I left a comment saying,"I seem to have fallen off the 'Highway' recently," as I hadn't had any coincidences for ages. Trish left another comment in answer to mine: "I don't think anyone can really fall off the highway. We're surrounded by these connections, It's mostly about being aware of them."

I mostly work quite near to where I live but occasionally, about twice or three times a year, I have to attend a meeting with the hierarchy. I had a prior-to-Christmas meeting last week and had to go to Holborn in London.

I took the London Underground tube train to Holborn station from where I could walk to the meeting place. That's what I should have done, but for some weird reason I missed my stop. I have no idea how as I have done the same journey several times.

The next stop on the Central Lane is Chancery Lane. I got off knowing I would have to go back one stop on the next available train. I was walking to the correct platform when I heard a voice shouting, "Suzie, Suzie!" I looked round and there was an old friend I had lost touch with. I hadn't seen her for about five or six years.

One of the weird things is that I had actually been talking about her the previous evening and said to my partner, "I wonder what ever happened to Mary?" We always got on so well together but she moved away following a relationship break up and then I moved as well.

That's my coincidence. It's think it funny how I met Mary again at 'Chance'ry Lane.

I have exchanged contact details with Mary and we are meeting up properly this weekend. If I hadn't have missed my tube stop I would never have met her. We have lots of gossip to catch up on. Looks like I'm back on the Synchronicity Highway.

For those who may not know The Synchronicty Highway is Trish & Rob's latest book:

Other Recent Posts:
Riding The Synchronicity Highway
Coincidence Of Woman Who Saves Both Her Husband And Father By Donating One Kidney
Classic Coincidence: She Fell From Heaven And Landed At His Feet