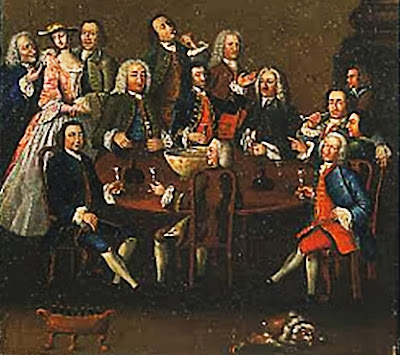 One of the secret organisations, often featured in popular fiction, is the Hell-Fire Club from the early and mid 1700s. The name of the club actually came later and was originally known by several names at the time such as: The Brotherhood of St. Francis of Wycombe, Order of Knights of West Wycombe, The Order of the Friars of St Francis of Wycombe and even the Monks or Friars of Medmenham.

The club is famed for it's outrageous goings on but at the time it was seen as a form of rebellion against the strong Christian religion of 18th Century Britain. It was initially founded in London by the Duke of Wharton - a known atheist - in 1719 who set out to ridicule religious orthodoxies of that time.

The club soon closed and Wharton went on to become the Grand Master of English Freemasons - not too sure how he could have done this, with him being an atheist. Perhaps that's why he didn't hold the position for very long and went on to organise his own anti-masonic order.

The Hell-Fire Club was resurrected in 1746 by Sir Francis Dashwood and several friends. Some of the rituals were passed on to the new group by Lady Mary Wortly Montagu, who had previously been a mistress of the Duke of Wharton.

The earliest meetings took place in a London pub - the George and Vulture - but soon moved to Medmenham Abbey where it continued for the remainder of it's existence.

The Abbey was completely overhauled by Dashwood and a celebrated collection of pornography was installed along with a Chapter Room for private 'ceremonies'.

Underneath the Abbey a series of caves were carved out from an existing one. This was decorated with mythological themes, phallic symbols and other items of a sexual nature. The Hell-Fire Caves at High Wycombe, Buckinghamshire (England) can still be visited - photo below. 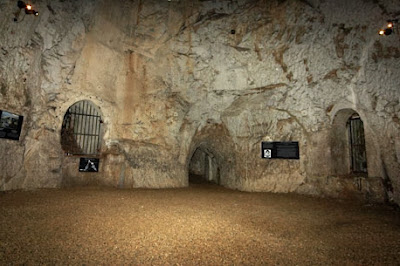 Above a doorway, in stained glass, was the motto: Fais ce que tu voudras - Do what thou Wilt - which was adopted much later by Aleister Crowley.

It's generally thought that members of the organisation attended events while wearing black monastic robes. Pseudo-Satanic rituals took place. The men were accompanied by 'nuns' who were hired for the evening. Nuns being the polite way of saying prostitutes.

Leading members of the organisation included the Earl of Bute and the Member of Parliament John Wilkes.

Wilkes described the action at the Abbey as, "... a set of worthy, jolly fellows, happy disciples of Venus and Bacchus, who got occasionally together to celebrate women and wine to give more zest to the festive meeting, they plucked every luxurious idea from the ancients and enriched their own modern pleasures with the tradition of classic luxury." 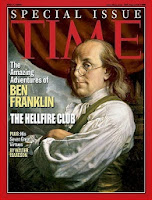 It is said that Benjamin Franklin - another Freemason - indulged while on a stay in England.

The Hell-Fire Club was in part a rebellion against the moral restraints of the period. It was somewhere that fantasies could be acted out in a safe setting. Early in it's history it made attacks on the dogmatic religious beliefs that were behind political autocracy.

Some of the club's practises were believed to have been influenced by the 'Chevaliers of Jubilation' - a libertine secret society founded in Holland. Members of the Chevaliers produced a book Treatise on the Three Imposters. In this they argued that Moses, Jesus and Muhammed were 'swindlers' who manufactured bogus religions in order to manipulate the masses.

I find it interesting that lurking behind such 'secret' organisations are often the aristocracy, politicians and other so called 'important' people.

Posts About Freemasons:
Freemasons: The Solemn Obligation Of A Master Mason
The Magic Behind The Secret Lodges
A Secret Freemasons View Of Old Age And Death