He Felt Dirty After Being With The Aliens 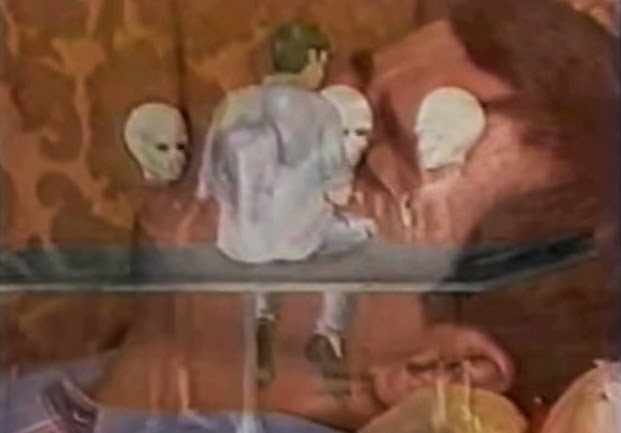 Bill Herrmann claims that he was carried on a tubular beam of blue-green light into a flying saucer, this was on March 18, 1978. He was then examined by aliens from another star system and afterwards dropped off, terrified, in a field several miles from home.

About a year later he obeyed a telepathic summons from the same humanoid creatures and met the craft for another trip up the blue-green beam and into space.

Herrmann has been hypnotised several times to help him remember his experience.

He first saw the saucers or UFOs in late 1977, but in March 1978 he watched a metal disc, about 60 feet in diameter, as it manouvered near his home north-west of Charleton, USA.

Herrmann told the Herald-Journal in 1981:


"It [the flying saucer] dropped abruptly from the sky. Suddenly it was right in front of me. I fell backward. The next thing I knew there was light all round me, green and blue, and I felt myself being tugged upward.

I couldn't remember anything. I didn't know where I was. A terrible fear came over me and I stood weeping for what seemed a long time. I felt dirty. I felt like I can't describe it. I felt like I had been around something I shouldn't have been around."

Under hypnosis he recalled an examining table within the flying saucer, also flashing lights and creatures who looked like human fetuses with enlarged heads and eyes. They had spongy white skin and wore rust coloured jumpsuits. They were about 4.5 feet tall.

Herrmann also tells of a further visitation. On April 21 1979 he claims a pair of aliens materialised briefly in his home. Then on May 16th he saw the spacecraft again from his home and received a telepathic message that he was to meet them at a nearby industrial estate.

Once at the rendezvous a blue-green tube of light again carried him inside the craft and he found himself on the examining table. Herrmann said of this, "I felt repelled by their appearance. But I felt inferior in their presense."

The aliens/occupants of the craft told him that they were from a world near twin stars, more than 30 light years away, where their entire civilisation was devoted to interstellar exploration.

Herrmann claims the saucer/craft travelled to Florida. Here they whizzed him past the Kennedy Centre and showed delight at the primitive vehicles on the ground.

He went on to say that the aliens told him that Earth governments had resisted attempts at friendly contact, but they insisted they meant no harm and their purpose would eventually be made clear.

And that is Herrmann's story. Below is a YouTube video of one of his hypnotic regressions. It's quite lengthy.


Other Alien / UFO stories:
UFO And Alien Sexual Encounters
Aliens May Cause Death Disease And Displacement
10 UFO And Alien Stories