But For Fate I Wouldn't Have Been Born 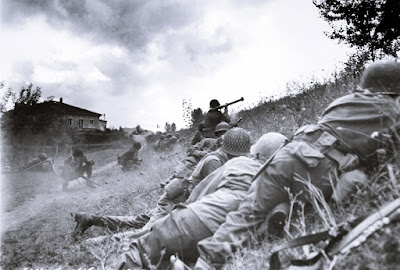 During the miserable wet Autumn and winter of World War II's Italian Campaign in 1943, both sides were bogged down and had to dig themselves in - in a perverse reminder of the horrors of trench warfare of the previous Great War.

Gord Young was a young soldier caught up in the circumstances which had landed him and his two buddies in that dangerous situation. Their slit trench was living room, bedroom and toilet, a human refuge. It was their home for more than two miserable weeks.

Occasionally the entrenched soldiers were permitted the luxury of a hot meal at the field kitchen some distance back from the forward lines. It was brief but very welcome respite.

On one occasion, after Gord and his pals had been out for a meal, they carefully made their way back to the trench. It was no longer there. During their brief absence, a three-inch mortar shell had landed squarely on their 'home', totally obliterating it. Had they been in the trench at the time they would also have been obliterated with it.

The workings of coincidence, fate, Kismet or whatever you may wish to call it are mysterious. My own father, during World War 2, had to go to work, leaving early in the morning. He had forgotten to take with him something he needed, so turned around to get this from where he was living.

A German bomb exploded where he would have been walking if he had continued. In a way his life was saved and mine too. If he had been killed I wouldn't be here now - I wouldn't have been born. We really are all subject to the hand of fate. Some are drawn into a situation, while others are spared.

It makes you think!

Other Random Posts:
67 Years After The D-Day Landings They Meet By Coincidence
The Unusual Contact With Her Dead Mother
Gulliver's Travels Tells Of Two Mars Moons Before They Were Discovered