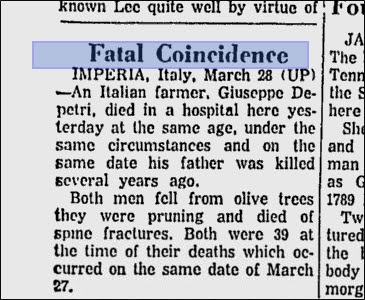 A newspaper clipping of a fatal coincidence story from Italy:

Imperia, Italy, March 28: An Italian farmer, Giuseppe Depetri, died in a hospital here yesterday at the same age, under the same circumstances and on the same date his father was killed several years ago,

Both men fell from olive trees they were pruning and died of spine fractures. Both were 39 at the time of their deaths which occurred on the same date of March 27.

Other Recent Posts:
But For Fate I Wouldn't Have Been Born
Gulliver's Travels Tells Of Two Mars Moons Before They Were Discovered
The Coincidence Of Meeting Someone Many Miles From Home