Squirrels And The Life Force 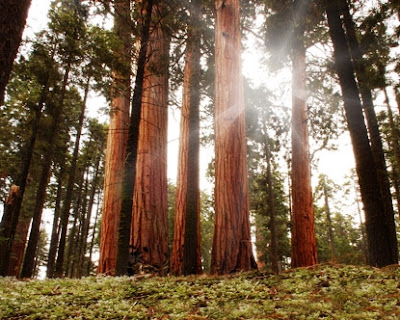 I snapped a photo of a squirrel this morning (as below) and got talking about acorns. Then, as sometimes happens, the first thing I read when I got home was a story about squirrels and acorns! 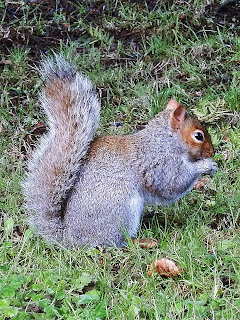 Shingle mill workers at Fort Bragg, California, uncovered a nest of acorns in cutting open the heart of a redwood tree, and Union Lumber company foresters believe they were placed there by a squirrel sometime before Columbus discovered America.

They would, however, run a poor second, so far as age is concerned, to the grains of wheat found in an Egyptian tomb which is thought to have held them for more than 2000 years, It is said that the grains grew when placed in the ground. Although some reports have discounted this, it does not tax the imagination any more than the mystery of how life got into those seeds in the first place,

It would be interesting to plant the acorns found in the redwood tree at Fort Bragg to see what would happen.

A lotus recently was reported blooming for the first time in 2000 years in a Tokyo museum, the second seed of age to be revived bt Dr, Ichiro Ohga a Japanese botanist, The seeds were found embedded in a canoe in a peat bed near Tokyo.

According to Wikipedia, however, seeds have been grown older than this :


The oldest carbon-14-dated seed that has grown into a viable plant was Silene stenophylla (narrow-leafed campion), an Arctic flower native to Siberia. Radiocarbon dating has confirmed an age of 31,800 ±300 years for the seeds.

In 2007, more than 600,000 frozen mature and immature seeds were found buried in 70 squirrel hibernation burrows 38 metres (125 ft) below the permafrost near the banks of the Kolyma River. Believed to have been buried by Arctic ground squirrels, the mature seeds had been damaged to prevent germination in the burrow, however, three of the immature seeds contained viable embryos.

Scientists extracted the embryos and successfully germinated plants in vitro which grew, flowered and created viable seeds of their own. The shape of the flowers differed from that of modern S. stenophylla with the petals being longer and more widely spaced than modern versions of the plant. Seeds produced by the regenerated plants germinated at a 100% success rate, compared with 90% for modern plants.

The life force does seem to go on.

Other Random Posts:
The Answer To Sexier, More Colourful Dreams
Automatic Writing And A Letter From The Dead
The Meaning Of White Feathers As Messages From The Dead