Saw A Ghost In A Vacant Store - Mystery Solved At Last 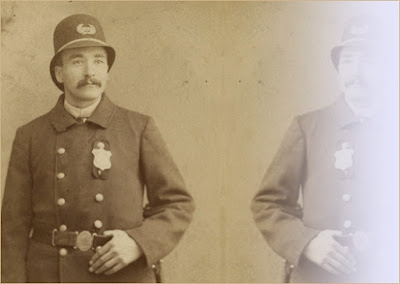 There's always an explanation some will say ... ghosts are only imaginary. The debate has rumbled on for hundreds of years. Here's a ghostly story I found from 1898 - where the mystery is solved.


The residents on and near Racine Street in the vicinity of Brady and Kenwaunee Streets, Milwaukee have had a ghost scare recently which culminated in alarming the whole neighbourhood.

Adjoining Greib's drug store at 851 Racine Street, there is a vacant store which a short time ago was occupied by an undertaker. In the front window there was formerly displayed a casket to show passers-by the nature of the business transacted within. As usual in all establishments of the kind many times corpses were brought to the place for embalming.

A few night ago [November 1898] a servant girl employed in the neighbourhood, ran to the house where she works and stated positively that there was a ghost in the window where the casket had been. She was terribly frightened and solemnly affirmed that she had seen the figure of an old man curled up as if lying in an imaginary coffin. His face was the face of death.

The man of the house called a friend and investigated the store. They saw nothing to arouse any curiosity or create any fear.

The report, however, that a ghost had been seen spread and on several occasions the figure was noticed by others. Young ladies have noticed the being and ran away with shrieks. Men and women have had creepy feelings as they felt the presence of some uncanny thing.

Noises were often heard in the store. The tramping of feet and heavy breathing as if of a dying man. Groans and, according to the tale of one frightened child, the rattling of chains.

Last night one of the young ladies who live in the neighbourhood saw the figure. She was certain that the little old man was there in the window curled up as if in a casket. She ran home and spread the alarm.

Later the young lady, with six of her friends, proposed that they all go around and see if the ghost was still in the window. The proposition was accepted and accordingly they passed the place. There it was as sure as they were themselves!

Finally one of them went close to the window and looked in. There was nothing there. The being had disappeared. But on a second look there was a figure of an old man in the dark corner of the store crouching as if in pain. He turned his head and looked straight at her. The girl ran away shrieking.

They found a police officer, but he thought they were fooling him and declined to return with them to the store. Upon their insistence, however, he approached the place and he too, started back, for there in the window was the ghostly figure again.

Pulling himself together and encouraged by the fact that even ghosts must respect the majesty of the law, he came close to the window and was more than astounded to see the figure turn and look straight at him. Then it arose and disappeared in to the darkness.

The officer tried the door and the being came from its hiding place and unlocked the door ...

... it was the janitor of the place. He sleeps in the window because there is no bed there. The neighbourhood had become quieted and the haunted store will no longer be a place of fear and trembling.

Other Random Posts:
Maureen Was Scared Of The Ghost Wearing Only A Shirt
Famous Coincidences: King Umberto I
The Fly Coincidence Amazed My Aggressive Boss