Maureen Was Scared Of The Ghost Wearing Only A Shirt 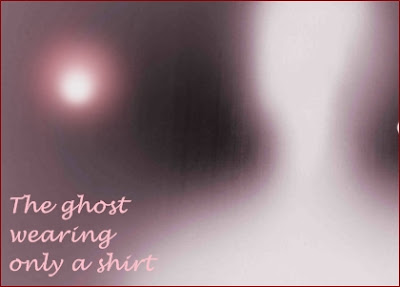 A ghostly tale today from Maureen, who sent me this after reading Best Of Friends: Daisy The Ghost And Jasper The Dog. The difference being that Maureen was frightened by her experience whereas Daisy was a gentle, almost loving ghost.


My family, that's me, husband and five year old child, were going on holiday and flying from London's Heathrow Airport, which is about a 200 mile journey from where we live.

By coincidence a friend told us his father had died and we could use his now empty flat [apartment] to stay overnight. It was only about 10 minutes from the airport. What's more we could also leave our car there as well.

I was reading away and glanced up and saw what I took to be my husband walking down the hall-way. It looked like he was just wearing his shirt and nothing else, which was a bit odd, but I thought no more about it. I imagined he was going to the kitchen for a drink of water or something.

Other Random Posts:
The Ghost Sightings In London's Top Hotel
Write Home To Mother Coincidence
The Grey Ghost Who Walks Into A Doorway That Is No Longer There