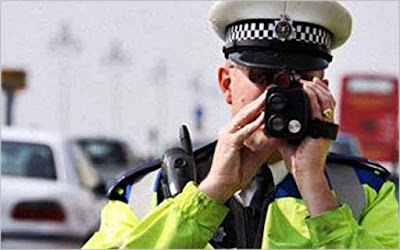 Back to coincidences today, seen in the Daily Mail, this one is about being caught speeding.


In February I was caught speeding by a mobile police camera, doing 47mph on the A689 Carlisle bypass, which is a 40mph zone.

I was given the option of attending a speed awareness course, which I accepted, and attended the course in a Carlisle hotel in April.

There were 24 of us, and we were divided into tables of six. At one of the breaks I began talking to the guy sitting next to me, who came from Newcastle, about where we were caught speeding. I mentioned that I had been caught by a mobile camera on February 19 on the A689 Carlisle bypass, which was a short distance from the hotel.

What are the chances of two people meeting at a course, having passed by each other within a few minutes of being flashed by a police mobile camera, almost two months previously?

Note: In the UK, as an alternative to a speeding fine and penalty points, a speed awareness course is sometimes offered.

Other Random Posts:
The Most Gruesome Coincidence About President Lincoln
How Henry Ford Dealt With Problems
Impossible Pie: A Way Of Life And Death