Over 6000 Pages Of UFO Reports

The UK government has just released a series of UFO files from it's secret archives, they can be seen here. There is a lot of stuff to wade through, over 6000 pages, covering from 1994 to 2000.

Highlights include such things as:

Several people claim they saw a UFO over Michael Howard's home. He was, at the time, an important UK politician and held the post of Home Secretary. The witnesses say they saw a large triangular UFO, which they estimated was the size of a large jumbo jet. The craft hovered over his house near Folkestone in Kent.

One witness, Sophie Wadleigh, describes what she saw, "It was so peculiar, it all felt really odd and I heard this humming noise. As I looked across the field I saw a large triangular craft hovering about 300 metres off the ground."

Another unnamed person said, "I was really frightened by it and I'm not stupid. I don't believe in anything like that. This is not something I've ever seen before or like something we would have built."

There are also UFO sketches of other incidents, some interesting, some not so. Below is a sighting allegedly seen at London's Heathrow airport in 1993. Think of it what you will! 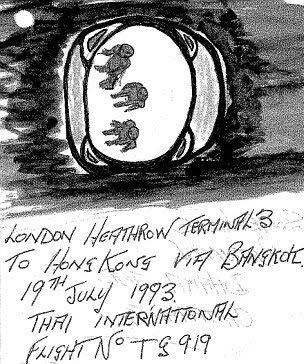 Then there is a UFO encounter by a man from Ebbw Vale in south Wales in January 1997. He claims he was driving his car when he had to stop and was surrounded for around five minutes by 'a tube of light'. His mobile phone and car radio stopped working during the incident.

To quote the records: "First sighting seemed like a 'massive star' moving towards the car. Having stopped the car and switched the lights off, the light encircled the car, remaining for perhaps five minutes ... (The man) was able to walk through the light which was very bright. There was no sound, no aircraft or helicopter noise, and besides feeling ill was very frightened."

Afterwards the report continues, "He felt and was indeed sick later on. He is still feeling ill today (28/1/97) and has developed a skin condition. Advised to see doctor." The whole incident was reported to the Ebbw Vale police at the time.

Other stories are the likes of: a man who saw an illuminated blue triangle over his garden; a UFO travelling at a speed of over 1,000 knots tracked by a senior air traffic controller at Glasgow Prestwick Airport; a 'near miss' between a Boeing 737 airliner and a UFO when approaching Manchester Airport; on June 11, 1997 a male claimed he was visited by a flying man ... and so the reports go on and on. 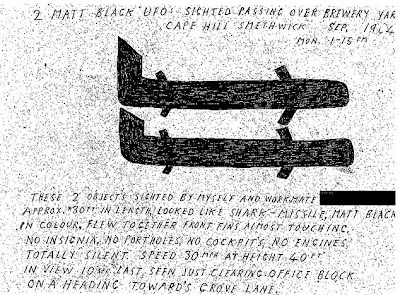 If you have lots of time rummage through the 6000 pages and see what you think.
Posted by Mike Perry at 11:01