Though known of for many years previously (recorded by the Chinese in 240 BC) Halley's Comet was named after Edmond Halley, he concluded in 1705 that the comet returned every 76 years. If you missed the last one, we'll all get a chance to see what all the fuss is about on July 28th, 2061 (fingers crossed!). 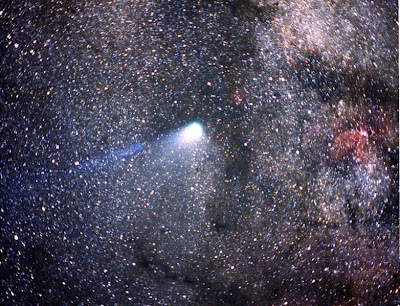 Halley's Comet is thought of as a once in a lifetime experience but it wasn't for the writer and satirist Samuel Langhorne Clemens better known by the pen name of Mark Twain. I'm sure you will know that he wrote such classics as Adventures of Huckleberry Finn (1884) and The Adventures of Tom Sawyer (1876).

Many famous coincidences you have to take with a pinch of salt, but this one about Mark Twain and Halley's Comet does seem to stack up. He was born on November 30th, 1835 exactly two weeks after the comet's perihelion - along with, of course, many other people.

The difference is that mark Twain made a prediction in his autobiography, published in 1909. He wrote: 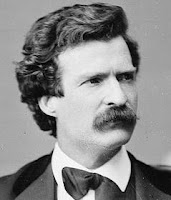 "I came in with Halley's Comet in 1835. It is coming again next year, and I expect to go out with it. It will be the greatest disappointment of my life if I don't go out with Halley's Comet. The Almighty has said, no doubt: 'Now here are these two unaccountable freaks; they came in together, they must go out together.'"
And, sure enough Mark Twain left this earth on April 21st, 1910 the day following the comet's perihelion. So his prediction proved correct.

It's a nice story but doubters will no doubt point out that in 1909 Mark Twain wasn't in the best of health and already suffered chest pains. It wasn't too difficult, therefore, for him to predict that he would die the following year.

I prefer, however, to just to go along with the Halley's Comet and Mark Twain coincidence as I feel sure he'd be chuffed to think that we do.