Feathers And Symbols For Guidance

Something I just realised regarding yesterday's post about my wife being stranded in Germany because of the Icelandic Volcanic dust.

When I went out early yesterday for my morning walk there was a grey feather on my path. I have mentioned previously that feathers have become a sort of symbol for my wife and I. White is good, sometimes spiritual, and black is for something bad. So that means grey is somewhere in between.

As I continued my walk there was a white feather in front of me but it was all dusty, though in perfect condition otherwise.

It was only afterwards that I saw the possible significance. The grey feather for something that would happen. Not bad but aggravating. This made me think of the problem of my wife being stuck in Germany.

Then I remembered the dusty white feather. She was still in Germany because of dust - volcanic dust.

It's easy to say that this is a little fanciful and I often say myself that sometimes we can analyse things too much. But somehow those two feathers do seem meaningful for me.

......oOo......
I've been seeing quite a few white feathers recently when I walk. So one morning I let them guide me. By this I mean I let them decide where I should walk. If there was one on the corner of a junction I would turn that way. This happened a couple of times and I bumped into an old man my wife and I sometimes chat to but hadn't seen for a while. He recently lost his wife and seems very vulnerable.

We talked about life and the world and then I continued on my way. When I eventually got home I thought about the feathers and wondered if they had led me to the old man. Perhaps he needed someone to talk to.

Again, maybe I'm over analysing but I think there are signs out there that we sometimes ignore. As to what the signs may be, I feel that they are different for different people. 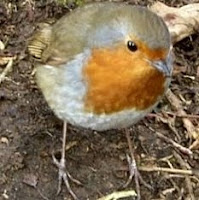 My friend always says a robin brought him good luck. One Saturday he was off to a football match to see his team play an away game. The team, by the way, also had the nickname of 'the robins'.

He drove about half the distance and pulled into a lay-by for a cup of tea. His wife was with him and he pointed out a robin sitting nearby. The bird then hopped onto his car bonnet and he said words to the effect that this was lucky and therefore his team would win.

Before he left he crumbled up a small biscuit and left it for the robin. As he left the lay-by, in his mirror, he saw the robin feeding away and the bird appeared to look up as if in acknowledgement.

Yes, his team did win. But he was luckier than this because he bought a lotto ticket as he entered the ground. At half time the result of the lotto was called over the loud speaker and my friend won £1000 (about $1600). So the robin did bring him luck. And maybe leaving something for the bird brought him some extra luck. Kind acts are often rewarded.

Email ThisBlogThis!Share to TwitterShare to FacebookShare to Pinterest
Labels: symbols