The Egg Custard Or A Lucky Coincidence

This is a story from the BBC's WW2 Wartime Memories Archives and was submitted by Genevieve. It tells of how an egg custard saved a life. 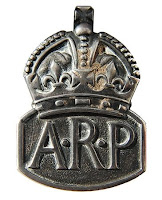 Let me set the scene. It is 1941, at the start of the Blitz, the 10th of January. The place is Southsea in Portsmouth near the railway lines at Fratton. Our family consisted of my dad George, my mum Rene, my elder sister Muriel, and I am Roy who had his 5th birthday a few months earlier. Dad worked as a printer and travelled daily to Gosport, and in the evening served as a member of the ARP (Air Raid Precautions), that much maligned band of people who are so badly served by the TV image.

On this particular evening during which the air raid warning had sounded, we had finished our tea and Dad was talking about going on duty, but Mum said that Dad was to have his egg custard before he left as she had made it especially for him. At that time fresh eggs were in short supply in the City. Dad dutifully ate his pudding and, while he was eating, two loud explosions suddenly shook the house and it was remarked that 'they were close'. Having finished his pudding, off he went.

From conversations afterwards it appeared that one of the explosions was a bomb that destroyed the ARP Post that Dad would have been in. At least one Warden was killed and one buried for a long time. Dad would not talk about this incident or any other subsequent events. But thanks to the egg custard, his life had been saved.

We remained in Southsea for the duration and suffered damage to our house, but that is another story. The story of the incident of the Egg Custard remained buried as a memory only to be revived by the history projects programme.

WW2 People's War is an online archive of wartime memories contributed by members of the public and gathered by the BBC. The archive can be found at bbc.co.uk/ww2peopleswar