The Ghostly Ghost Photo Of The Brown Lady

Ghost photos are invariably in dispute. Today in the UK newspapers, for example, has been the report on the Wem Ghost picture. This has now been proven to be a girl superimposed from an old 1922 postcard. For 15 years people thought the photo genuine.

This reminded me of the Brown Lady Ghost of Raynham Hall (photo below) which, as far as I know, has never been shown to be a fake. Some call it the most famous ghost photo in England. There is a history to go along with the photo. 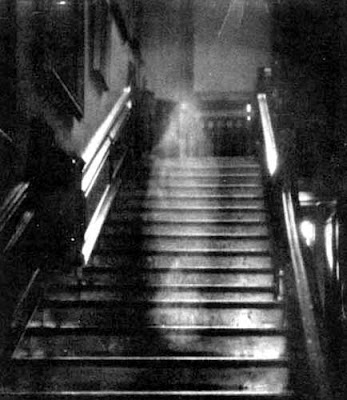 The story is that the Brown Lady is the ghost of Lady Townsend who was imprisoned in the estate by her husband. She remained there until her death. No wonder she was a might miffed and now hangs about Raynham Hall, which is in Norfolk, scaring people. 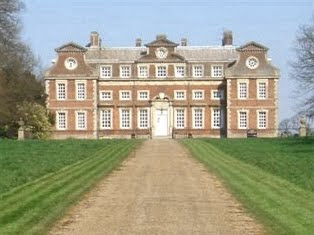 There have been some famous sightings of her ghost. King George IV is said to have seen her while he was in bed. He looked up and there she was in a brown dress, pale faced and with her hair disheveled - which is no way to greet a king! This was way back during the nineteenth century.

In the early 1800's a Colonel Loftus was at the hall for the Christmas festivities. He saw the ghost in the hall, again wearing a brown dress. She then disappeared. The Colonel, obviously a glutton for punishment, saw her a second time and noticed that her eyes had been gouged out. I guess that is the sort of thing you would notice.

Sightings of the ghost continued. There was one by Captain Frederick Marryat who saw her gliding along the upstairs hallway. The story is that he fired a gun at her - no idea why - the bullet went right through her, which surely was to be expected, and lodged in a wall.

As for the photo itself. This was snapped in 1936 by two photographers for the very respectable Country Life magazine. The gentlemen were the exotically named Captain Povland and Indre Shira.

Indre Shira explained, at the time, as to how they came to take the photo:

"Captain Provand took one photograph while I flashed the light. He was focusing for another exposure; I was standing by his side just behind the camera with the flashlight pistol in my hand, looking directly up the staircase. All at once I detected an ethereal veiled form coming slowly down the stairs. Rather excitedly, I called out sharply: 'Quick, quick, there's something.' I pressed the trigger of the flashlight pistol. After the flash and on closing the shutter, Captain Provand removed the focusing cloth from his head and turning to me said: 'What's all the excitement about?'"

The subsequent photo was published in Country Life on December 16, 1936.

Further Reading:
The Ghost Of Abraham Lincoln Walks The White House
The Ghost Who Leaves Pennies In A Tyre Depot
A Doctors Messages From The Dead