I expect that for many readers this is probably pushing the coincidence thing a little too much, but thought I'd still publish it.

When a big name dies unexpectedly lots of predictions about the death come out of the woodwork. Think Elvis Presley, Princess Diana, Michael Jackson and, in this instance, John Lennon. 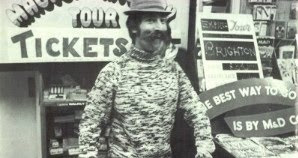 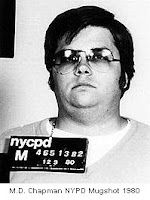 Let's look at the photo above, supposedly a picture which predicts John's death.

That's John in the pic, standing by a sign which reads: 'The best way to go is by M D & Co.' But in the photo the o of Co is missing. This leaves MDC which just happens to be the initials of his killer - Mark David Chapman. (Photo Right: NYPD mugshot of Chapman in 1980, Public Domain)

And another coincidence MD&Co are, so I'm told, funeral directors!

So there you have it, a photo which predicted John Lennon's death and also gave his killers initials ... maybe, perhaps ...