The Gun That Helped Sink The Titanic

I have written previously about coincidences involving the Titanic - see links below - but today I'm writing about how the disaster may have never happened without the gun pictured below. 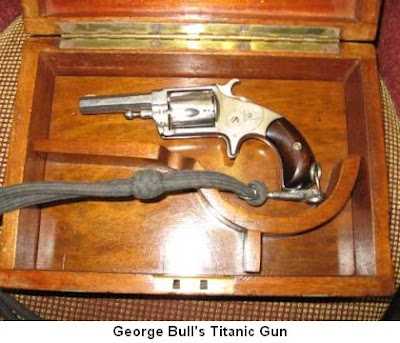 In 1912 Britain was in the grip of a coal strike. This concerned Titanic's owners White Star Line as, without coal, their groundbreaking ship would not be able to set sail.

White Star took proactive action and decided to send George Bull - mostly said to be a bursar or a purser for the company - to Merseyside along with a colleague R McPherson. Their mission was to secure coal for the Titanic - no matter what.

George Bull was armed with the pistol as shown above. It is said that the men intimidated the striking miners while other reports say that they simply stole the coal at gun point. Either way the outcome was the same. They came away with sufficient coal to ensure that the Titanic would be able to set sail on time and with sufficient fuel for the journey.

If it wasn't for this gun the Titanic would have been unable to sail when it did and would not, therefore, have hit the iceberg. Lives would not have been lost. The more you find out about the Titanic the more it seems to have been destined to sink.

Most of the facts check out. The gun is on record as being issued to George Bull in March 1912 by White Star Line 'for his protection'. It is inscribed on the butt 'From MCP to GFB Titanic Coal Strike.'

The gun being sold comes with its original lanyard. There is a brass disc attached with the White Star Flag and on this is engraved 'RMS Titanic George Fredrick Bull', and on the reverse is printed 'If found contact Purchasing Dept. 14 Leadenhall St. London, EO3 Tel. Royal 9150'.

So if you have a few hundred thousands to spare, and collect Titanic memorabilia, the people to contact are the Antiques Storehouse of Portsmouth, UK. Unfortunately the item does not appear to be on the Internet at the time of posting.