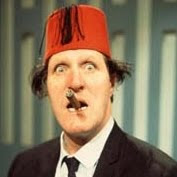 Something a bit light hearted today. People often seem to see Jesus' picture in bizarre places but how about finding a comedians face in a pie crust!

For non UK readers Tommy Cooper was a cult comedian and magician, who died on stage while performing back in 1984. His catch phrases such as 'just like that' are still heard today as are some of his corny jokes: 'I popped into my local pub the other day and had the shepherd’s pie. He was furious.'

Anyway, chip shop owner Crad Jones was getting stuck into his pie and chips (that's fries in the USA) when he saw an image of Tommy Cooper in his pie. He'd eaten hundreds and hundreds of pies previously but this was a first. 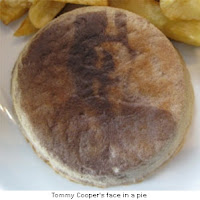 Mr Jones said, "The comparison was amazing. It was definitely Tommy Cooper. I called my daughter over and she recognised it as Tommy Cooper too. I got the pictures because I thought no-one would believe me." Now as if anyone wouldn't!

He went on to say how this exciting find came about, "I was about to eat my lunch in the shop, as I normally do. I got my Peter’s pie, which I always have with chips and peas, and noticed the resemblance of Tommy Cooper on the bottom of it."

And we'll finish the pie with a few Tommy Cooper jokes:


I went to buy some camouflage trousers the other day but I couldn't find any.

A man walked into the doctors, he said 'I've hurt my arm in several places'.
The doctor said 'well don't go there any more'.

Two fish in a tank, one says to the other - you drive I'll man the guns.

I cleaned the attic with the wife the other day. Now I can’t get the cobwebs out of her hair.