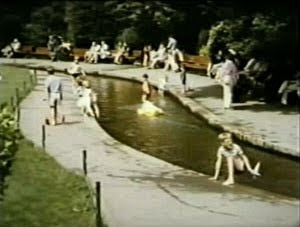 A short coincidence story today which I saw in the Bournemouth Echo.

Andy Ashley had quite a surprise when, on a visit to Bournemouth, he paid a visit to the Russell-Cotes Art Gallery and Museum. They were showing a 1969 video illustrating how Bournemouth had changed as a tourist destination over the years. He then noticed a small boy playing with a toy boat on screen and must have thought, 'He looks familiar.'

He then realised that he was the small boy! That's Andy in the forefront of the photo (a screen shot from the video) stepping out of the stream. He remembers playing with the small yacht all those years ago.

Andy told the Bournemouth Echo, "It is quite an amazing coincidence that over 40 years later I should happen to see the video and recognise myself on it."

A spokesperson from the Russell-Cotes Gallery added, "It was an amazing coincidence. What are the odds? There were quite a few videos we could have chosen but we chose that one. It must have made their visit."

Andy Ashley, who lives in Nottingham, just happened to be in the right town at the right moment to get a special glimpse of his past.