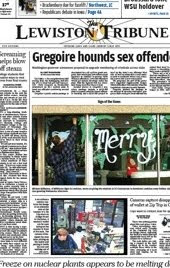 I find this story a really bizarre coincidence, so much so it's almost too good to be true! But it all checks out as far as I can see.

The Lewiston Tribunal (Idaho) published an edition of it's newspaper just prior to Christmas time. On it's front page there were two photos. One of a man painting a sign on a shop window and the other was of a man caught on a security camera and being suspected of 'removing' a wallet containing $600 from a local convenience store.

The two photos were not linked in any way by the newspaper, other than being on their front page. The report by the second photo told of how Jami Johnson had left her wallet containing the money and her credit cards at the store by accident. The cash was to be used to pay for her Christmas.

It didn't strike the newspaper reporters or editor that the men in the two photos looked very similar, they were even wearing the same clothes - you could say they were pretty much identical.

The two photos were, of course, of the same man: Michael Millhouse.

Fortunately readers of the Lewiston Tribunal were a little more switched on and phoned the police and the newspaper office. Millhouse was subsequently arrested and charged with second-degree theft, and appeared in Asotin County Superior Court.

So justice was done by a remarkable, bizarre coincidence. For any doubters the front page of the Lewiston Tribune, showing the photos, can be viewed here in pdf format.