Police at the side of the A390 road, Cornwall

My wife and I had to go somewhere this morning by car and before leaving home I had this feeling that we would see lots of policemen. I realise this is easy to say, as I can't prove it - so you'll have to trust me! 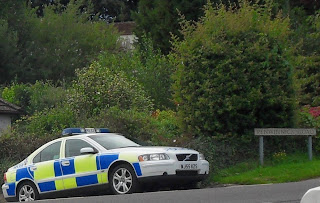 We did what we had to do and I suggested we go somewhere for a walk. I drove to a regular spot of ours and parked the car.

After our walk we headed home. I said to my wife, "We'll have to go slow through London Apprentice* as there will be a speed trap."

No idea where this came from but, sure enough, as I drove through the 30 mph area there were several police with speed guns checking how fast vehicles were travelling.

I thought this must have been what I 'felt' when we set out first thing. As I neared home, however, there seemed to be police galore and they were pulling in lots of cars, searching them and checking car tax, insurance and so on. I've no idea what they were checking with this man on the right - looks to be something to do with the petrol (gas).

Luckily I avoided this but I snapped a few quick photos of the police at work.

I know it's a theme I've mentioned quite a few times but I find that it pays to heed feelings or intuition - it could save a speeding ticket, or much more besides.

* London Apprentice is a small hamlet in south Cornwall. The most likely reason for the name is with reference to a sailor who, unable to get work in the 1700s, travelled to London to get a trade. He therefore became known as the 'London Apprentice' once he returned to Cornwall. First mention of the name dates back to 1747.