A coincidence example about an old soldier and how he was able to contact the person who rescued him over 50 years ago during World War 2. 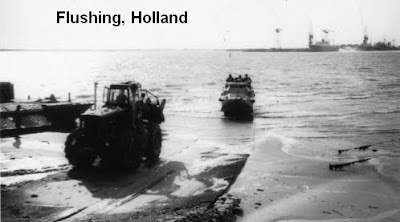 It was supposed to be 23 year old pilot Jack Dack's 33rd and final mission before heading back to Melbourne in Australia. As he flew over Holland on October 23rd 1944 his Lancaster bomber was shot down by enemy fire.

Before the RAAF (Royal Australian Air Force) pilot knew what was happening he found himself virtually unconscious in the ice cold River Sheldt at Flushing and was slowly drowning. His crew had been killed.

A German anti-aircraft marine spotted Jack through his binoculars and did a remarkable thing. Against the orders of his officers he set out in an inflatable dinghy to try and rescue him. It was brave to do as, besides ignoring his officers wishes, there was a gale blowing, the river had a fast current and he had to travel through minefields.

The Gods were on his side and he managed to rescue the injured Aussie airman, though Jack Dack remembers very little of this. He was taken prisoner but his life had been saved.

The RAAF pilot always wondered who had saved him from certain death.

Winding forward over 50 years, Jack had a friend in Holland and he had been reading a local newsletter. In this there was a story about a German who, during the war, had managed to rescue what he thought was a British airman from the river at Flushing.

Jack's Dutch friend sent him the article, which was about a soldier called Hans Bannick of Kiel.

As good fortune often goes in coincidence stories Jack's son, Stuart, happened to be working in Germany at the time of the article being received. He managed to find an address and phone number for a Hans Bannick in Kiel.

A very nervous Jack made a phone call to Germany and sure enough it was Hans who had rescued him all of those years ago. Jack has written: "He answered the phone himself and he spoke English and he was my rescuer. We had a long and happy talk. Since then we have exchanged before and after photos and stories."

As for the Hans Bannick he remembers how an officer told him that it was senseless to go and risk his life for an enemy as he was a terrorist airman who had participated in allied air raids on the Heimat (Homeland) and who perhaps had tried to murder his relations in Germany.

Bannick, however, ignored this and ventured out into the river without a helmet or weapons and carried out the rescue.

Though this is essentially a coincidence story we can all probably read much more into it.

For those interested in such things Jack Dack's Pilots Record can be seen here.