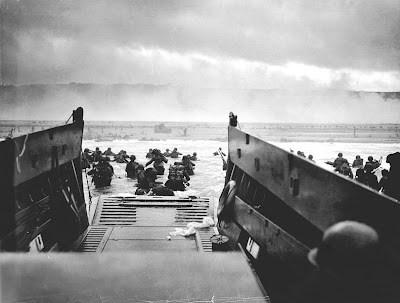 I'm going back to World War 2 again today, not sure why this keeps happening - but there is no doubt a reason.

This time its the 1944 invasion of Normandy, more popularly known as D-Day. Needless to say this was all very much Top Secret stuff at the time, obviously the allies didn't want to let the enemy in on what was about to happen. To prevent this a series of code names were set up.

The whole operation itself had the code name of 'Overlord', the naval operation was 'Neptune' and the two beaches, where the allies were to land, were named as 'Omaha' and 'Utah' and the artificial harbour that would be set up was code named 'Mulberry'.

Maybe not the best set of names but nevertheless deadly secret - so how did these names appear in the British Daily Telegraph newspaper hidden within their crosswords? A Coincidence? The British MI5 weren't so sure.

They questioned the crossword compiler, Leonard Dawe, who was a headmaster at the Strand School in Surrey, England. Was he passing on messages to the Nazis?

Was it in the crossword clues:

... and so it went on: Overlord was an answer on May 27 and on May 30 the clue was The bush in the center of nursery revolutions - yes, the answer is the codeword Mulberry.

Then on June 1 the clue was Britannia and behold the same thing. Answer: Neptune. MI5 agents thought this was taking the, erm, Mick for want of a better word, so Leonard Dawe was arrested.

MI5, however, couldn't pin anything on Dawe. The codewords in the crosswords were purely a coincidence, so he was released.

Of course, as can be expected, there were alternative theories to it being a coincidence. For example, Dawe's brother-in-law worked at the Admiralty. Did he learn a few secrets from him. Or maybe it was Canadian troops, who were based nearby, that passed on information unwittingly.

Years later in 1984 a Ronald French, who was one of Dawe's pupils in 1944, gave his version of events. He claimed on BBC television that it was he who inserted the code names into the crosswords. It appears that Dawe sometimes allowed pupils to help with the puzzles. French says he learnt of the code words from US and Canadian soldiers.

The official version though is that Leonard Dawe was completely innocent of collaborating with the enemy - it was all one big coincidence.

Further Reading:
The First And Last Soldiers Killed Coincidence
By Coincidence Man Stumbles On Missing WW2 Grave
Coincidences Which Solved Mystery OF WW2 Giant
Mystery Of The Angels Of Mons