Our Friend Recognises My Wife's Bottom In Boscastle 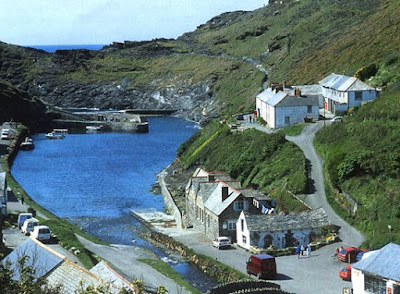 This is a coincidence I mentioned way back when I first started writing this blog. I thought I'd update it and publish it again as, at the time, 67 Not Out didn't have too many visitors.

My wife and I were away on a long weekend break to North Devon and on the journey home I decided to take a longer scenic route, which took in the rugged north coast of Cornwall. It got to about 11 o'clock and I saw a sign to a small village called Boscastle.

My wife went to the back of our car to make some tea. I looked again in my mirror and remarked to my wife that the man who had just pulled his car in behind us looked a little like Mick, a friend of some 30 years.

To cut a long story short it was our friend and his wife. Mick said he didn't realise it was us until he recognised my wife as she was bending over the car boot!

Now they live some 180 miles from where we live and they too, unbeknown to us, had also had a weekend away. They too were on their way home, in their case some 270 miles away. We were on our way home, about 90 miles away.

The strange coincidences were that:

(1) They arrived only minutes after us.

(2) They parked directly behind us, when they could have gone anywhere in the big car park. If they had chosen another spot we could have easily missed seeing them.

(3) Neither of us knew the other would be anywhere near Boscastle.

(4) As they drove into the car park Mick, and his wife Janet, were talking about coincidences.

So did one of us receive some sort of telepathic message that we should head for Boscastle? Was it purely by chance or an example of synchronicity? Whatever, we spent a pleasant, unexpected, time together.