The Flying Dutchman - From An Old German Print 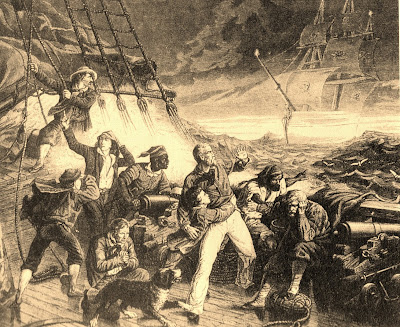 I thought I'd step back in time today to the 17th century and the legend of the Flying Dutchman. This is supposedly the ghost of a ship where the Dutch Captain refused to find a safe port during a gale by the Cape of Good Hope. All of the passengers and crew were consequently perished at sea - but the ghost of the ship still sails the seas and has been seen many times.

One of the most convincing sightings was in 1939 by around sixty people who were relaxing and enjoying the sunshine on Glencairn Beach, South Africa.

As if out of the blue, which I suppose it was, an apparition was seen of a high-pooped 17th Century sailing ship. A local newspaper told of how 'all her sails were billowing, although there was not a breath of wind at the time.'

The British South Africa Annual from the same year described how 'the ship sailed steadily on as the beach-folk, shaken from their lethargy, stood about keenly discussing the whys and wherefores of the vessel, which seemed to be bent on self destruction on the sands of Strandfontein. Just as the excitement reached its climax, however, the ship vanished as strangely as it had come. The many witnesses on the beach were certain they had seen the fabled Flying Dutchman.

No less than King George V of Britain also glimpsed the Flying Dutchman. This was at a time when he was a naval officer on the HMS Bacchante. In his private journal he wrote about the appearance of a strange red light, 'in the midst of which the masts and sails of a brig stood out in strong relief as she came across our port bow, but there was no vestige or sign of a material ship.'

Spookily the Flying Dutchman is said to bring with it bad luck. The first seaman to spot the ghost ship on King George V's ship fell from the mast later that day and died.

In 1929 a ship travelling from Australia to England rounded the Cape of Good Hope. Fourth Officer N.K. Stone described what he saw. This was also witnessed by the 2nd Officer and the helmsman:

It was a very dark night, overcast, with no moon. We looked through binoculars and the ship's telescope and made out what appeared to be the hull of a sailing ship, luminous, with two distinct masts carrying bare yards, also luminous; no sails were visible, but there was a luminous haze between the masts. There were no navigation lights, and she appeared to be coming close to us and at the same speed as ourselves. When first sighted she was two-three miles away, and when she was within about half a mile she suddenly disappeared. I shall never forget the 2nd Officer's startled expression - 'My God, Stone, it's a ghost ship.'

Of course the spoil sports will always say that the Flying Dutchman is nothing more than an hallucination, or in the case of the 60 beach lovers a mass hallucination - or a mirage perhaps.

If we can accept that there may be ghosts in buildings and on land then why not also at sea. If a ship went down in dramatic, emotional circumstances then the very essence could well be captured in the mists of time.